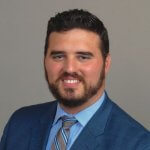 Jim is a Vice President, Financial Advisor and managing partner of The PDG Group at Morgan Stanley. Jim works with clients in tailoring custom wealth strategies to meet their needs. In addition to his emphasis on non-qualified plans, Jim also works closely with the team’s C-suite executives in creating customized financial plans and investment portfolios to help them build and preserve their wealth effectively. For Jim, professional success is measured in terms of client well-being and goal achievement.

Investing has always been a part of Jim’s life. Growing up in the North Hills area of Pittsburgh, his father would read off his favorite ticker symbols from the paper and would later joke that it was such blue chip stocks as IBM that sent Jim and his siblings to college. This longstanding focus inspired Jim to pursue a profession that would combine his love for the markets with his desire to help others. He set out to become a financial advisor.

While earning his B.S.B.A. degree in Finance from Slippery Rock University, Jim interned at Merrill Lynch for two years. Upon graduation, he joined PNC Investments, where he worked alongside bank branch advisors in northern New Jersey to service existing clients. In the fall of 2009, Jim was hired into Morgan Stanley’s Financial Advisor training program and returned to the Pittsburgh area. He joined The PDG Group soon after.

Today, Jim enjoys serving his clients and becoming their “go to” person for anything financial. He calls Pine Township his home, where he lives with his wife, Sara, and their children, Alex, Aurelia and Annie. Jim is a strong believer in paying it forward and is an active member of his church. Outside of the office, he loves to make music. An amateur drummer for 15 years, Jim loves to find time to play with his brother. He also likes to hunt and fish and enjoys the great outdoors with his family.