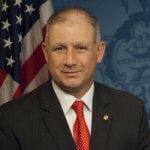 As the eldest child of immigrant parents, Dan was the first member of his family born in America. Raised by a single mom from an early age, finances were often challenging. Even so, his family instilled in him a strong appreciation and recognition of the special opportunities America offers. As a result, Dan has made public service an important part of his life.

He enlisted in the Army National Guard after high school. While his military service was cut short due to injury, he found another way to engage in service. As a Team Leader in the AmeriCorps National Civilian Community Corp, he led a team of young people working on community projects across the Mid-Atlantic. Dan earned undergraduate degrees in education and history and became a teacher. He later graduated with a law degree from Catholic University, where he received two community service awards, chaired their public interest auction, and served as executive editor of their communications journal. Upon passing the bar, Dan decided to serve the community again as a public defender focusing on juveniles and later as a county solicitor where he worked to make sure kids were safe in their homes and received a proper education.

Dan and his wife Kim moved to Mt. Lebanon where he joined the Mt. Lebanon Fire Department as a volunteer firefighter. In 2011, he was awarded the Medal of Merit for his attempt to save the life of a three-year-old child from a devastating house fire. He went on to be elected as a municipal commissioner, and has served the community as a board member of such local institutions as Outreach Teen and Family Center, the Center for Theater Arts, the Hollywood Theater in Dormont and the Carnegie Library.

Dan was elected to the House of Representatives in 2013 and recently elected as Chair of the Allegheny County House Democratic Delegation. Additionally, he serves on the Education Committee, the Judiciary Committee, the Labor and Industry Committee, and the Human Services Committee. He is the Co-Chair of the Sub-Committee on Special Education, the Autism and Intellectual Disabilities Caucus, and the BlueGreen Alliance Caucus, and also is a member of the Climate, Early Childhood Education, Firefighters & EMS, LGBT Equality, HOPE and Steel caucuses.

Dan is the co-chair the National Task Force on the Future of the Workforce- an initiative designed to improve employment opportunities for people with disabilities. The task force is bipartisan, bicameral collection of legislators, agency heads, and advocates from across our country. It has been put together as a collaboration of the US Department of Labor, the Council of State Governments, and the National Conference of State Legislatures.

As state representative, Dan has received awards for his advocacy for people with disabilities from ACHIEVA, The PEAL Center, and the Rehabilitation and Community Providers Association, and he has been awarded a lifetime membership in the PTA.