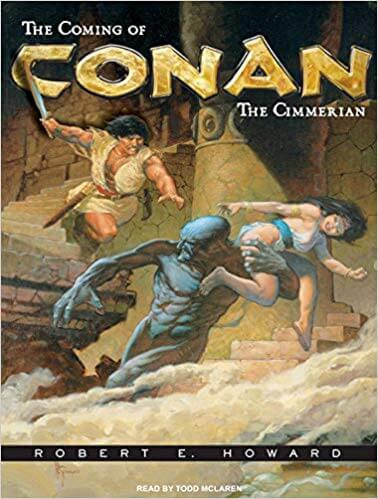 Conan the Barbarian.  The name draws to mind all the ridiculous images that have been drawn down the years.  He-Man.  That Schwarzenegger movie.  A huge figure with huge muscles in only a loin cloth.  Oh and probably dumb because that’s what people think of when they think of barbarians.  That is not the source material.

Robert E Howard’s Conan the Cimmerian is that giant figure.  Conan’s stories take place in the hyborian age.  This mystical age takes place between the fall of Atlantis and before the rise of written history.    Conan regularly runs into things that we recognize as mythology from ancient civilizations, but to him were real and most likely deadly.  In one story he is fighting for the Aesir against the Ice Giants, while in another he kills a child of Set, a god of darkness.  Howard sets his stories on the very edge of reality, that is if you excuse all the magic.  In fact, he received criticism from a mentor of his for making his names to close to real.  That critic was HP Lovecraft who specialized in making unpronounceable names so I side with Howard.

So why should you read tales from the 1920’s? Especially tales that are known for their rather… lewd illustrations?  Well, because they are amazing stories.  This is the invention of Sword and Sorcery.  While some people have taken it into the more medieval ends, this is the origin, where ancient ruins harbor dark magic, and the gods are very present in the surroundings, sometimes too present.  Also because Conan isn’t a dumb brute.  He is witty and intelligent, while not understanding the finer points of civilization, like sarcasm.  He is always ready to use violence because that is how you survive.

The origin of the illustrations is kind of interesting.  Weird Tales, the magazine that started Howard off, paid extra for stories that made the cover.  What kind of scenes would look good on the cover of the magazine and make people pick it up?  Why the most suggestive, or revealing or downright bloody of scenes!  That’s not exculpatory but its a reason.

We have The Complete Chronicles of Conan, by Robert E Howard.  DB 70130.  Read and enjoy.