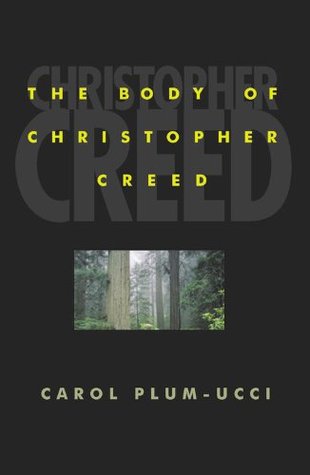 The Body of Christopher Creed (DB 52758) by Carol Plum-Ucci is a fiction novel that follows the story of a high school student named Torey as he navigates through his feelings of the disappearance of Christopher Creed. Creed, a somewhat unlikeable person, writes an ambiguous email that straddles the line between a goodbye note and a suicide note before, you guessed it, disappearing without a trace. Torey, who had few interactions with Chris, stumbles into a new group of friends and ends up investigating Creed’s disappearance.

Well written and extremely engaging I found myself blowing through this book in a few days. Yes there are some generic characters such as a musician, a cheerleader and a “dangerous kid” that seem to show up in many a YA novel but Plum-Ucci gives them more depth. Comparing their reactions of Creeds disappearance to the small town they live in broaches topics of reality vs nonreality and group think. Topics hard to explain to a younger audience, such as intended for this novel, despite being slightly more susceptible to it.

Creed is seen as this annoying kid who constantly smiles despite being consistently bullied to the point of severe injury. However, when his diary surfaces he has re-written his world to be much nicer than what is the actual truth or “reality.” As the news of his disappearance spreads through the town, people begin to point fingers and make up what they think happened. Some even openly accusing others with no ability to prove it. When evidence shows those finger pointers to be incorrect, they still cling to their un-truths because reality is too difficult to believe. The only people searching for the real truth were the ones amongst the accused.

Thinking about these ideas of absolute truth and group think I began to put them into context of the world’s current social and political economy. While we would like to be more advanced than a YA fiction novel written almost two decades ago, “fake news” is now a common term that is running rampant through our society and being “different” has a slew of negative connotations attached. These themes are timeless and a consistent issue society faces.

A surprisingly thought provoking novel I highly recommend The Body Of Christopher Creed as your next rainy day read.