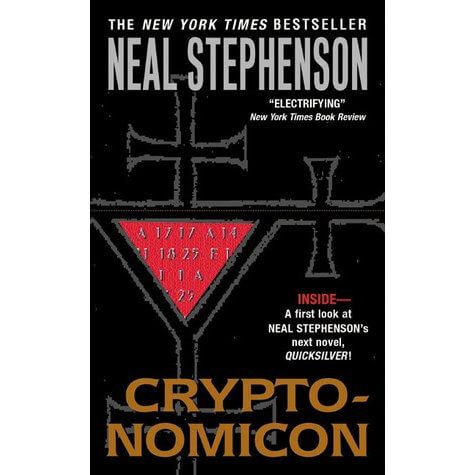 Neal Stephenson.  Just do me a favor and read all his books.  Except Anathem. Couldn’t get my metaphorical teeth into it.  But this post is on the Cryptonomicon.  This book is amazing.  It has two plot lines that advance simultaneously; one in WW II, and one in Modern Day with the descendants of the WW II characters.  As you might guess from the name, the book covers cryptology and code breaking, both in WW II and modern times. The LBPH catalog gives this summary.

To me this sounded amazing.  And it is. The book goes back and forth between complex maths and the high adventure of Marines.  It goes from the boardrooms of Silicon Valley to the jungles of the Philippines.  This book has it all. The Cryptonomicon also covers the dynamics of cryptocurrency, something just beginning when written and come to a whole new fore with the advent of bitcoin and its competitors.

The main characters are from two families who stick to their guns when it comes to character types.  You have the Waterhouses who are computer experts and range from really to only slightly nerdy. Then you have the Shaftoes who are strong types not afraid to be violent, ranging from a Marine raider to an ex Navy SEAL.  And you have Enoch Root who defies explanation. I guess you could call him the moral heart of the technology in both eras.

I’ve made the book sound a bit convoluted and there are parts I skipped as I took history in college and not advanced mathematics, but those parts are not necessary to get everything out of this book.  It is amazing. Please read it.