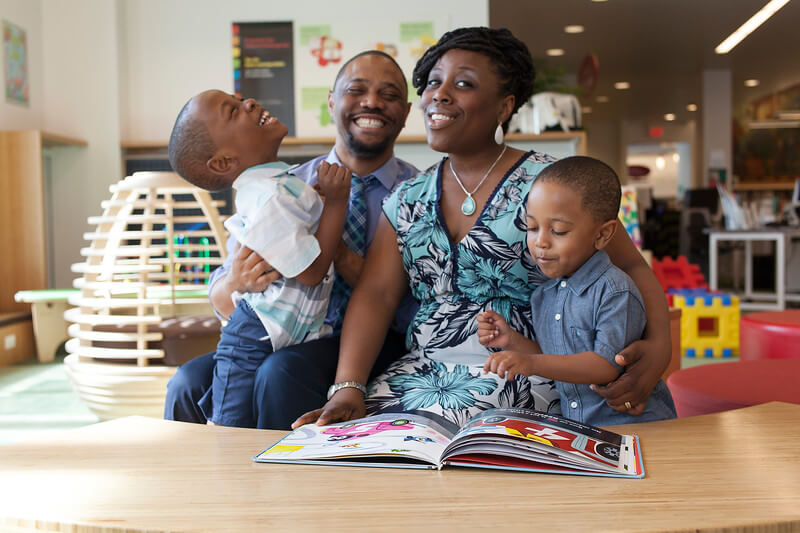 It may be a short bus ride from Highland Park to CLP-East Liberty, but for Nosakhere Griffin-El and his family it’s been a long journey.

After living and working as professors in Cape Town, South Africa for three years, the Griffin-Els returned to Pittsburgh in 2016, only to be confronted with a challenge. Their older son, Nosakhere Jr.(who was 3 at the time), was diagnosed with a speech delay.

“It felt like a gut punch,” Griffin-El recalls. “Our son needed our attention. He needed us to be his first teachers. So we made a family decision.” That decision called for his wife Eliada to continue her job as an associate professor at Robert Morris University while Griffin-El would take on the role of stay-at-home-dad, a role that included speech therapy appointments and intensive at-home practice sessions.

But the best part of the day was the trip to the Library.

Carrying kids (Nosakhere Jr. and Onyemachi, who was 18 months old), book bags, a diaper bag and plenty of snacks, Griffin-El would board the 71B bus and arrive at CLP-East Liberty 10 minutes later. Once inside, they would find themselves ready to dive into an ocean of books.

“Miss Amy (Children’s Librarian) would help me pick out books that would reinforce our phonics lessons,” Griffin-El says, “and then she would recommend biographies and books about Africa and African American history.”

That summer, the Griffin-Els signed up for the Library’s summer reading challenge. Taking advantage of book recommendations from library staff and searching the Library’s
online system, they logged an impressive 600+ books by the end of the year. What started as an imperative to help his son has turned into Griffin-El’s own passion. He’s committed to reading to his kids every day and wants others to do the same—so much so that for Black History Month this past February, he hosted a Meet Up Read Up event for parents and kids at the Library as part of the Young Dreamers Book Club he started on Facebook.

Now Nosakhere Jr. is about to turn 5, and according to his dad, he’s expressing himself in new and exciting ways. “He’s very passionate. He loves Legos and building things,” Griffin-El says. “He wants to become an engineer.”