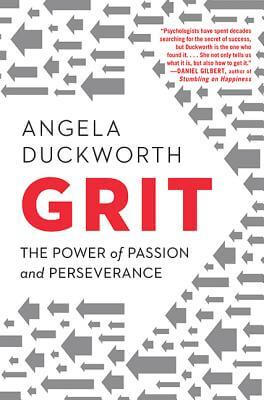 I have a twin sister who constantly gives me great things to include clothes, advice and book suggestions. Our book tendencies are opposite. I lean towards fiction while she leans toward non-fiction. Due to my lack of non-fiction inclination, I always ask her for suggestions which in turn fuels my next listing of recommend books. I’ve finally embraced the suggestions from her and now we are trading non-fiction titles every other month… but not the clothes, those I usually just take. The latest in her suggested reading list was Grit: The Power of Passion and Perseverance by Angela Duckworth. A book by a researcher and professor about the differences between genius, passion and perseverance.

Within the first chapter I was drafting this blog post in my head about how this book resonates so deeply with my life to date. Growing up I wasn’t naturally intelligent nor particularly gifted at anything artsy or otherwise. I worked hard (mostly) for my grades in school but it was my first dance class where I feel in love with movement and that in turn pushed me to strive for more. I wasn’t particularly a natural at dancing either but the passion to succeed and the achievements in that realm through hard work taught me to be gritty. It was that grit that started to bleed into other parts of my life. In Grit, Dr. Duckworth discusses all of this and the idea that just because someone isn’t naturally talented doesn’t mean they won’t be successful.

We as a society get distracted by talent and forget that grit and perseverance are just as important. This is all not to say that those who are talented don’t work hard however, more doors are open for them because of their naturally ability. One way I thought about this was looking back at fellow students who wouldn’t study and get A’s while I struggled to get passing grades. I felt constantly surrounded by these people and it wasn’t until college that I realized I was in charge of my outcomes. I remember studying hours for biology quizzes that were fourteen questions long and getting to dance class an hour early to warm up and review the combination. Recently I started discussing this book with those naturally intelligent friends and they told me they struggled after college because they hadn’t learned decent work ethic. This isn’t to say that they aren’t doing well but, to me this means that grit is a learned skill. A learned skill that can then be applied to anything you need it to. Grit is not just about hard work, it’s about perseverance too and the act of learning how to learn.