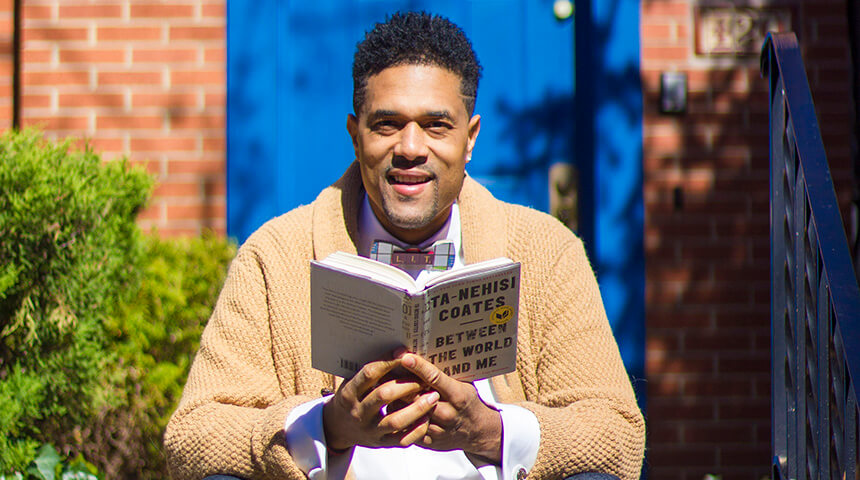 “So…,” Emmai Alaquiva says, pausing for a moment. “Being homeless.”

You’d never know it now. The guy with the title of CEO of YaMomzHouse multimedia studios. The one in the photo wearing the tux, holding the Emmy. Get Involved, Inc.’s “Man of the Year,” and recent appointee to the Council on the Arts for the Commonwealth of Pennsylvania.

You’d never think that’s where he was, twenty years ago. Living on the streets of the Oakland neighborhood. Under bridges. In crevices of buildings. A day or two or five on a friend’s couch. Taking showers at the YMCA on the Boulevard of the Allies. Eating at different shelters. Standing at the 7-Eleven with an empty cup in his hand. Do you have fifty cents, man? A dollar?

“You’re a scumbag,” they laughed.

“It was definitely a tough time,” he admits. “But unfortunately, sometimes, life gets in the way of living.”

It was the decisions he made. The direction he took. The deep depression that followed. “Life caught up to me,” he says. At a time when other twenty-somethings were vacationing on the beach, tearing the club up, he wasn’t. You’ll never amount to anything, he’d think. You’ll never be anyone. You don’t deserve any better.

“When you give up on yourself,” he says, “it’s difficult for people to believe in you.”

Emmai doesn’t remember exactly when he wandered into Carnegie Library of Pittsburgh, but he remembers crossing the threshold, and the moment he discovered Miles Davis, John Coltrane, Cannonball Adderley, Jack McDuff and George Benson in the CD room. He remembers surfing the Internet for the first time in the computer room, where he’d sit in the same chair, day after day after day. Checking this out. Checking that out.

“The library gave me the world in one building,” he says. “And all you have to do is open a book to open your world.”

He looked at himself as a winner in the Library. He felt human there. Librarians were patient, kind. Whatever you need help with, they said, let me know.

“The way I was treated helped me to realize the good in all people. That’s when I began to change my life around,” he says. “And so I got to a point where I got tired of not having an answer to my ‘Now what?’ question.”

So, he moved in with his mom. Started working for the post office. Then, as his interest in music and production became more known, he was offered a job at WURP 1550 AM as a producer for the Tom Joyner Morning Show, which led to odd jobs for the Shadow Lounge in East Liberty. His friend co-signed a loan for Emmai to open up a recording studio in a 300 sq. feet room above the bar, which eventually expanded to 600 sq. feet, then 900.

He hired his first employee in 2005. Three years later, Emmai was handed the Emmy for the film score to “Flyboys: Western Pennsylvania’s Tuskegee Airmen.”

Life was getting even better.

He co-founded Hip Hop on L.O.C.K., a nonprofit arts education program for youth across Pennsylvania, got married, started a family, and recently, hired his twelfth employee.

“None of this could have happened without the magical presence of a place called Carnegie Library of Pittsburgh,” he says.

Make an online donation to the Library.