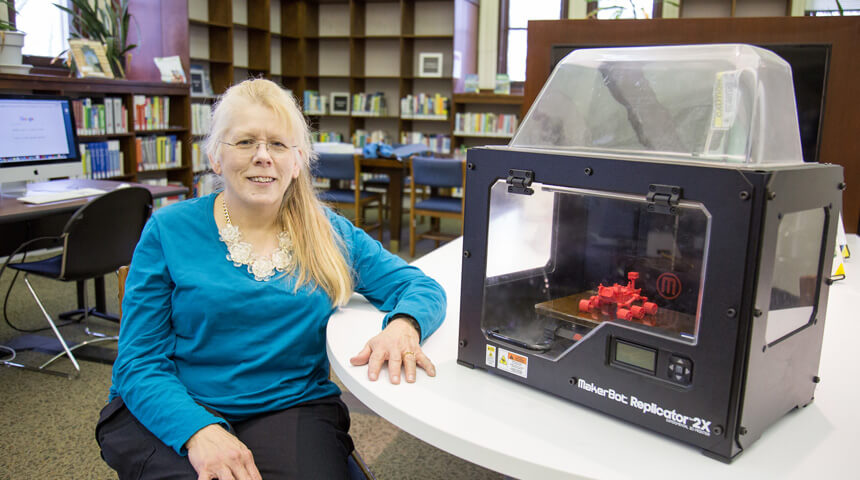 Enter Carnegie Library of Pittsburgh – Allegheny on a Tuesday afternoon and patrons — right in the center of the room — could be learning to sew or recording their own music.

“They love it,” says Barb Lawler, senior librarian. “It opens up more possibilities for them — things they never dreamed of or knew that existed.”

CLP – Allegheny launched a weekly Adult Creative Learning program this summer, where they encourage patrons to get creative, interact and maybe even learn a new skill, doing everything from making ornaments to singing karaoke.

The program is part of a larger initiative by Carnegie Library of Pittsburgh to introduce creative learning at all of its locations through hands-on, interest-based activities.

“We want people to rethink the way that they use the library and have it be this more dynamic, engaging space,” says Dan Hensley, Adult Programming Coordinator.

How this will play out could look different depending on the location. Librarians will adapt the programming to meet their patrons’ needs.

Kits were created that make it easy for library staffers to launch creative learning activities. The kits come with everything they need for an activity and instructions on how to do the task.

There’s a variety of kits that will circulate CLP locations. With “iPad audio,” you can press a couple of buttons to hear some neat beats or create pro-quality sounding tunes, depending on your interest. The “Photography: Stop Motion Film” kit allows you to follow a few basic steps and, viola!, you’ve created your own animated film.

The kits will be utilized in various ways, Hensley says.

Librarians can place a kit on a table or on a bookshelf, along with the instructions, and let patrons engage with them in a self-directed activity. Of course, the librarians won’t be that far away, if anyone needs help.

But the librarians aren’t necessarily trained in each activity, either. That’s the beauty of it. Everybody is learning together.

“It’s a safe place. Nobody’s an expert,” Hensley says. “We’re kind of learning this stuff right along with the public.”

If there’s a large interest in a topic — say photography — librarians then could even host a workshop, bringing in an expert on the topic to teach patrons more, Hensley says.

“We just really want people engaging and learning,” he says.

The Adult Creative Learning initiative is patterned after the nationally recognized Teen Labs program, which has been in existence since 2012.

Adults often commented as they saw teens playing the guitar or drums, Hensley says. They wanted to partake in the learning, too.

“It’s really learning together as a community,” she says.

The kits from The Labs programming are being used for the Adult Creative Learning initiative. However, they’re tailored for adults, specifically in the approach, Hensley says.

“We curated a set that we think will be a big hit with adults and that tie-in with some other of our initiatives with adults,” he says.

Creative Learning provides a lot of benefits, Morgan says. It gives you access to the tools needed to be creative. Think: a sewing machine or a synthesizer. It also teaches you how to do something new that could possibly be a future career, like photography. And, it empowers you.

“What happens is, you engage in this kind of learning. You learn a few things, you build your confidence, and it gives you this slight change in your perspective that you can actually change the world,” Hensley says.

Lawler has watched patrons who once sat on the sidelines now participating — and having fun — through Creative Learning.

Patrons also are enjoying the new way they interact with librarians, getting to learn right alongside them.

“And you’re getting to know your library neighbors. That’s a big thing,” Lawler says.