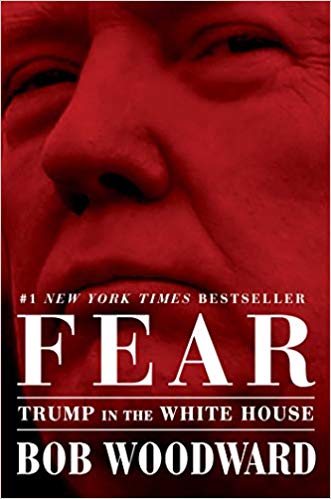 So much has been written and discussed about Bob Woodward’s latest book Fear: Trump in the White House (DB 91876).  The title appears to have been drawn from the book’s opening 2016 quote from then Presidential candidate Donald Trump in an interview with Bob Woodward and Robert Costa:  “Real power is—I don’t even want to use the word—fear.”  That sets the tone for the following chapters which portray a White House beset by internal conflict, policy reversals, confusion and ineffectiveness largely driven by the President’s leadership style and world view.

Woodward explains that the extensive interviews for his book were conducted under the journalistic ground rule of “deep background,” meaning all information provided could be used but without attribution.  Most of the hundreds of hours of interviews were tape-recorded for accuracy.  Woodward explains that “when I have attributed exact quotations, thoughts or conclusions to the participants, that information comes from the person, a colleague with direct knowledge, or from meeting notes, personal diaries, files and government or personal documents.”  He states that the President declined to be interviewed for the book, a claim that President Trump initially disputed until it was pointed out by the author that he attempted on several occasions, including through Senator Lindsey Graham, to speak with Trump prior to publication.

The book is full of incidents and conversations depicting misdirection, confusion and sabotage of Presidential directives. One striking example of this is remarkable and chilling:  Then Staff Secretary Rob Porter and Chief Economic Adviser Gary Cohn actually pilfered documents from the President’s desk to prevent him from signing them.  These included directives to end the U.S. trade relationship with South Korea and to unilaterally withdraw the U.S. from its trade agreements with Canada and Mexico.

The Library has books reflecting all of the political spectrum.  Regardless of your political perspective, this book is well worth reading because of the stature and reputation of Bob Woodward and because of its meticulous detail.