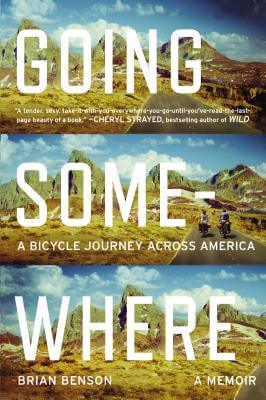 Have you ever come across a book that felt like it was fated to find you? Like you were meant to read it due to its parallel’s with current life situations? Such an occurrence happened to me last week when I was searching for a title of another book for a patron. Using goodreads, some “read a likes” popped up and I was drawn to a book called Going Somewhere: A Bicycle Journey across America by Brian Benson (DBC 02740). A regular biker myself from spring to fall and in search of an adventure book, I ordered it without reading anything further. Honestly I thought it would be more of a coffee table book or a travel guide. Imagine my surprise when a paperback travel memoir showed up, clearly worn in and loved by many.

I started it with excitement, hoping to quell the travel urge I had been feeling as of late (quarter life crisis anyone?). However, after the first few chapters I was somewhat disappointed. The story wasn’t bad but there was a lot of romance involved that I wasn’t expecting which I felt was unnecessary. But I continued on hoping that the author, Brian Benson, would get into more detail about the trip and the gritty search for campsites, water, and the feeling of biking 100 mile stretches.

While the romance did continue, the nitty gritty of biking across America came with it. Truthfully Brian came across as self-absorbed. The trip started with the couple excited and moving forward, but slowly a rift began to form and from my perspective, it was completely Brian’s doing. He would complain about Rachel in ways that she literally couldn’t fix for instance, the fact that she couldn’t ride as fast as him so he felt like he was being held back… dude…. Seriously? How conceded are you that you, an over six foot tall man, rides faster than your partner? YOU wanted her to come on this trip, YOU were nervous to ask her because you thought it was too soon and now what, you regret it?

Slight anger aside…. I do have to give him props because he would always admonish himself for these thoughts and try to put them in perspective. He knew he was being selfish and tried to shift his thinking. As the book came to a close, I realized that I didn’t mind Brian because he was human. He was flawed and was completely honest about it. The problems he was going through with Rachel, the joy he felt through this trip and his want to make things right felt similar to some journeys I’m currently going through. One of the big ones is wanting to travel more and feel that sense of the bigger picture. Honestly I think it’s a desire everyone goes through at some point. Having just hit a mile stone (age 30 whoop whoop) I was feeling that I needed to move faster, do more and see more. But in reality, enjoying the happy moments that happen organically and not forcing them is an important lesson. This is what Brian learned throughout his struggles and what I remembered throughout this book. I wouldn’t say I force moments but I do feel like I try to plan for them. I think I have always had this unrealistic idea about time and the importance of not wasting any but reading this book, and seeing Brian’s character change, made me realize that time is continuous and that we are constantly changing. Whether that change is for better or worse is ultimately up to us.

It may not have been fate that this book showed up on my list but it was shockingly coincidental. Although it was a bit of a rough read I highly recommend it, it will make you think.