“Maleeka, your skin is pretty. Like a blue-black sky after it’s rained and rained.” Miss Saunders, The Skin I’m In

What were you doing 20 years ago? In 1998, age 11, I stood in front of my grandmother’s mirror, frustrated. My hair, too coily. My nose, too wide. My skin, too dark. While standing in front of this mirror, I had no clue a book had been written and released. A book that would help me and so many others, black or not, love themselves. That book was The Skin I’m In by Sharon G. Flake.

Twenty years later, Sharon G. Flake’s bestselling, Coretta Scott King award winning novel is as relevant today as the first day it was published. Here, at the Carnegie Library of Pittsburgh, I sat down with Sharon to ask questions about The Skin I’m In, her life as an author and how the library had an influence on her as a child.

Can you tell us a little about The Skin I’m In and the inspiration behind writing the book?

You know, I tell people, from the moment my daughter was born I started telling her stories about dark skin girls who could fly. They could solve crimes, they could do all this wonderful, magical stuff. She’s dark skinned, and I knew that colorism was an issue. I wanted her to feel great about the skin she was in.

I went from that to writing my first story about two twins called, Lucky Sister, told from the light skinned sister’s perspective. (One twin was dark, one was light.) What it was like to be a sister to somebody who was always looked at differently? Then, I one day started The Skin I’m In.

It’s not my daughter’s story (The Skin I’m In), people think it is. She was seven when I wrote it, and she’s never been bullied, really. It really is a book about a dark skin teenager who has to find her voice and find her inner strength and confidence. Maleeka is being bullied because of how she looks, her clothes, her dark skin, and comes up with this idea that if I’m just friends with this one bully, that’ll make my life easier. It makes it worse. It’s a journey to find your voice, learn to love yourself exactly the way you are, regardless of what the world says, or what the world sees.

The Skin I’m In has been out for 20 years. What does it take for a book to not only survive 20 years, but to be as relevant as it was the first day it came out?

I think luck. That’s not all of it, but I think that’s some of it. You probably have to knowingly, or unknowingly write a story that has issues, topics and characters that can transcend time and space. One thing I consciously did (not because I wanted it to be around 20 years later), I didn’t do things to date the book. There’s no music, no television show that might have been mentioned 20 years ago. So, I intentionally stayed away from that.

You don’t know where it takes place. Kids will be in Alabama and say, “I know that neighborhood!” or, I’ll be in New York and they’ll say, “Oh, that’s here!”, or Philadelphia, or South Carolina. It has this everyplace kind of feel to it, and anytime kind of feel to it. I think in that sense I lucked up on a few things. Some of that was crafting.

If Maleeka had been written in 2018, would she have different perspectives on her identity?

There are two things going on, Maleeka feels very small and very little, but she has this big, powerful voice, and this way of looking at the world, but when she confronts her nemesis, she sort of shrinks.

I think, her issues would be the same because we haven’t moved past those issues. We’ve expanded in a way, with Black Lives Matter, and Black Girls Rock, and Black Girl Magic. Seeing the actresses and models that might have alopecia, things that would have prevented them from being in a magazine, even. Not because they weren’t beautiful, but because our definition of beauty was different.

So, even as the magazines try to change, on the ground kids are still struggling.

I think Maleeka would still be struggling, but she probably would have more resources to counter balance. Magazines and books being written by a multitude of people. She would still have teachers who understand a little more, but not totally.

She would go on YouTube, which 20 years ago, you didn’t have. She could get to see herself, or see all those girls who say, I look fabulous the way I am, I love the skin I’m in.

There would be a lot more resources for her to turn to.

What do you think makes The Skin I’m In relatable to children who aren’t black, who don’t go through those issues of, I’m too dark?

Twenty years ago, I was starting out as a writer and I’m thinking, I’m writing about black kids, for black kids. I’m at a mall and a Caucasian boy comes up to me, and he says, “This is my story.”

Maleeka is so frank, she’s willing to share her flaws. There’s not a lot of teenagers or young people that really want to walk up to their friend and say, “I’ve been getting bullied every day, and this is what they said, this is how they said it.” You would really have to share that with somebody close you trust, because you’re not going to say that to the world.

What Maleeka has done is she’s said, “Hey guys, I’m an open book. This is what’s happening to me.” I think because she’s so open, and she’s so vulnerable, it lets them be vulnerable.

How did the library influence you as a child, and now as an author?

We had a library not that far from my house, so we would walk to the library and get books. When I walk into the Carnegie Library here, I go into the Children’s Department, where the little chairs are. I can still smell my old library in the wood of the chairs. When I was in middle school, like a lot of writers, your sanctuary was the library in school. Not because anyone was doing anything to you, but again, I’m on this island and it’s just me. I would just go there at lunch time and I would get books.

In that sense I always had a nice warm feeling about the library, and the librarians.

What advice would you give 16-year-old you?

What did you read when you were a kid? How are these books still important today?

I tell people, if I knew you were going to ask me what I read as a kid, I would have tried to remember. Anyone who knows me knows that I can’t remember a whole lot from childhood. I only remember reading Sixteen, a book about a teenage romance. It had a white protagonist, because back then, that was all we pretty much had. I loved that book. I read Langston Hughes, Simple. That’s another book I loved and I say those two books kind of inspired me. If you look in my books, there’s always a romance. Sixteen did that.

Then, Langston Hughes, I opened his books and I remember thinking, wow. I loved that voice and I knew that voice, because my mother has that voice, and my grandmother and my father. I loved the neighborhoods he hung out in, the conversations he had. My father grew up in Jim Crow South, so I knew some of the things he had been through. My mother was a day worker, she scrubbed floors. I knew what Langston was talking about.

I was raised in the inner city, on a small street that I always loved. Between them and my parents and my grandparents, they told me by example it was ok to be a little black girl from North Philadelphia. Here, I opened Langston Hughes, and he just verifies what my family and my neighbors have been telling me.

Girl you’re alright. That brown skin and the way you move through the planet. The fact that your mother loves ham hocks, and your father works this kind of job, we got you.

What I love about this journey is that so many kids can read my books and walk away with the sense that I’m saying, I got you. You’re alright. Don’t sweat it. It’s hard sometimes, it’s tough sometimes, you feel alone sometimes, but you’re not by yourself.

That’s probably the best thing about being a writer.

I think that sometimes after reading a book, it kind of feels like a hug, especially when that’s the message- you are ok as you are. No matter what.

You’re not the only one.

Our five-year-old patron would like to know, what’s your favorite color?

At one point it was teal green, which was the color of my kitchen. Now, it’s probably yellow, the color of my living room, dining room, bedroom, hallway. Different color yellows because it reminds me of the sun, and the Caribbean.

That makes me happy.

Thank you so much Sharon for this interview, for writing a book that has endured time, and being a phenomenal person, inside and out. 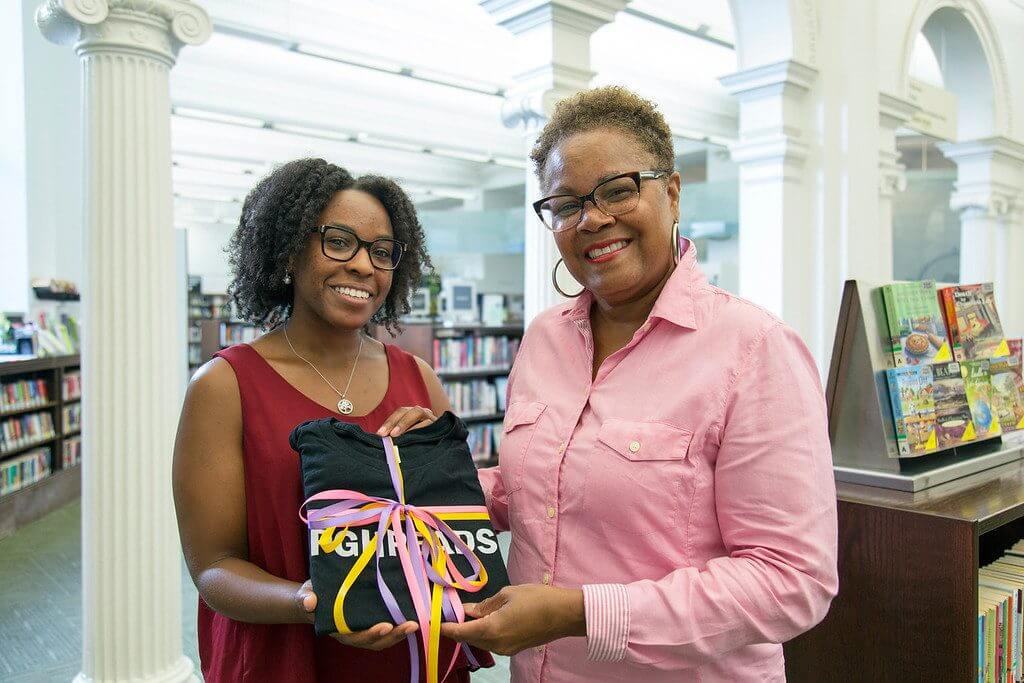 Be sure to join Sharon G. Flake on October 16th to celebrate everything about The Skin I’m In. Tell the world why you love the skin you’re in via Facebook, Twitter, or Instagram. Be sure to use the hashtag #theskinimin and #sharongflake

On Wednesday, November 28th, join Sharon at the Carnegie Library of Pittsburgh, Homewood Auditorium, 7101 Hamilton Avenue, Pittsburgh, PA 15208 for Reflections of our Complexions: An Evening with Sharon G. Flake, 6-7:30pm.

Brittany is a Library Assistant in the Children’s Department at CLP – Main where she enjoys reading stories, singing songs and ending her storytimes in a multitude of bubbles. Reading isn’t her only love, she also enjoys writing for children and adults alike.

An Evening with Sharon G. Flake