On February 28, Brie Larson won her first Oscar for her performance in Room.

After I saw the movie, I was in such a funk that people actually asked me if I was all right. Like the book upon which it’s based, it compels you to watch, even if it’s uncomfortable at times. Despite the depressing nature of the narrative, I found the film to be more uplifting and, dare I say, more optimistic at its conclusion than the novel. For a great review of Emma Donoghue‘s book, check out Melissa F.’s old post.

It would be hard at this point to find new arrangements of words to praise those involved with Room. The score is nuanced and wouldn’t be out of place on a Sigur Rós or an Explosions in the Sky album. I could fill pages about how great Jacob Tremblay is and can only hope he doesn’t go the way of a young Drew Barrymore. I’m super-excited to see him in Before I Wake. But it’s Larson’s award-winning performance that moors the whole film. As Jack’s Ma, she is both friend and disciplinarian, provider and confider, broken yet brave. She’s tender and tough, often in the span of a few frames. Like if a mountain was a teenage girl who was still a little unsure of herself.

It’s always nice when the Academy, despite its myriad problems, deigns to give praise to an actress who isn’t Jennifer Lawrence. Hop on the Brie Larson Appreciation Train that I’ve been riding since late 2010 and check out her range in two of her older films.

Scott Pilgrim vs. the World 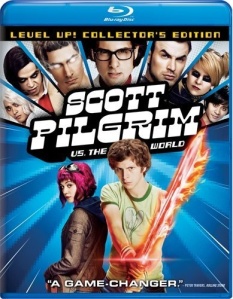 It was here that I first came across Larson. She plays one of Scott’s ex-girlfriends, Envy Adams, lead singer of The Clash at Demonhead. I loved her sexed-up, over-the-top performance, which wouldn’t be out of place in a movie like Beyond the Valley of the Dolls. When she takes the stage and vamps through a pretty fantastic cover of Metric‘s “Black Sheep,” I realized that she might be more than a pretty, funny face. She could have played Envy as a shrill, one-note witch of a woman, but there’s a vulnerability beneath Envy’s rockstar facade that comes through in a surprisingly tender moment. Whatever the film’s problems are, her self-aware performance is never one of them.

This hidden gem was one of the best films of 2013, elevated by Larson’s performance. Prior to Room, I’d have said that this was her best work. Doing a chameleonic 180-turn from her role in Scott Pilgrim, she gives a poignantly raw performance as Grace, a supervisor at a residential treatment facility for at-risk youths. Grace is the kind of character who deeply feels each of the kids’ problems, not to mention her own stack of issues as well. While she at least has the chance to resolve the tumult of her personal life, there will always be at-risk youths. Grace acknowledges this at the end of the film, flashing an almost Sisyphean grin, her resolve to do the work stronger than ever despite its inherent troubles.

In everything she’s been in, she’s made me care about her characters. She was one of many enjoyable surprises in 21 Jump Street. She was the best part of The Spectacular Now and Digging for Fire. She was delightful every time she cameoed on Community and stole every scene she was in in Don Jon despite hardly speaking. I’ve heard she’s good in United States of Tara and Trainwreck as well.

She’s a great actress that also seems like a genuinely pleasant person. Now, if you’ll excuse me, thinking about Room has made me sad, so I’m gonna go watch that Jenny Lewis music video where Larson sports a red tracksuit and a moustache. That’s my sweet spot.

Have you seen Room? How about any of her earlier films? Is there one I should check out? Sound off in the comments below.