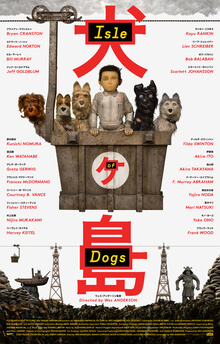 A few years ago I was introduced to the Wes Anderson films through the brilliant movie Moonrise Kingdom. I loved the style, the symmetry, and the actors cast for the variety of characters in the movie. Since then I have run through all of his films more than once, re-watching favorites and adding on new ones each time. My recent marathon included the aforementioned Moonrise Kingdom, Fantastic Mr. Fox, and his newest creation Isle of Dogs.

The storyline follows an outbreak of Dog flu that causes all the dogs to be exiled from a major city in Japan to Trash Island. The mayor, a well-known cat lover, is plotting to rid the city of all dogs once and for all and spouts the dangers of dog flu. His charge, a young boy he rescued, has other ideas and runs away to Trash Island in search of his beloved dog Spots. After crash-landing his puddle jumper, the young boy befriends five other dogs most of whom vow to help on his quest for his best friend. I was fully prepared to love Isle of Dogs, mostly because well… its talking dogs! However, I tried to go into it with a clear head so as not to be potentially disappointed. No matter how far-fetched an idea that was (pun intended). Within the first few minutes I was captivated by the stop-motion animation and how far along it has come since the days of Fantastic Mr. Fox. As the story line progressed I mentally added it to my next Wes Anderson re-runs as it slipped in to my top five favorites.

Wes Anderson has a special kind of humor that I feel is just dry enough to make anyone giggle, especially when it comes out of the mouths (snouts?) of multiple dogs and one twelve year old Japanese boy.  Another stunning layer of this movie is the beautiful portrayal of Japanese culture. The detail of the colors, dress, food and well known Japanese actors culminates to an immersive experience that made me disappointed I didn’t speak Japanese.

Wes Anderson’s ability to tell a heartfelt story with his style of wit coupled with the beautiful backdrop of Japan creates an unforgettable movie that will be quickly become one of your favorite movies, at least I hope. If you get a chance, check out the movie Isle of Dogs or Moonrise Kingdom to start your Wes Anderson movie experience. You can also check out the book that created the movie Fantastic Mr. Fox, written by childhood favorite Ronald Dahl.