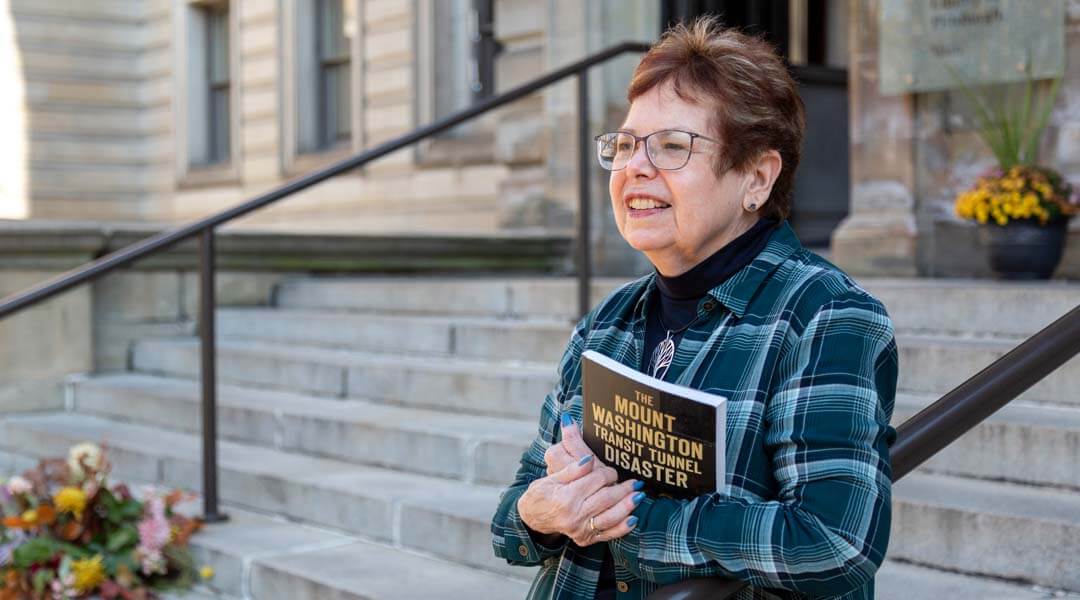 It all started with a family mystery. In 2011, Mary Jane Kuffner Hirt, Professor Emerita at Indiana University of Pennsylvania, was asked by her mother to learn more about a family member who had died in a Pittsburgh trolley accident in the early 1900s. There were no specific details to work with. No clues at all, really. Severe injuries and deaths due to trolley accidents during that time period were not uncommon occurrences. It seemed like it would be an impossible mystery to solve.

On Christmas Eve of that same year, Mary Jane’s mother saw something in the Pittsburgh Post-Gazette’s Almanac that caught her eye. It told the story of twenty-three people who had died in what had become known as the worst transportation accident in the city’s history. She gave Mary Jane the clipping. It might be the clue they needed. Two days later, on December 26, Mary Jane went to the Pennsylvania Department within Carnegie Library of Pittsburgh’s Main Library in Oakland seeking microfilms of the local newspapers.

Thanks to you, the Library can offer valuable tools for family and historical research.

“I was immediately horrified by what I read,” she says. “Since I still did not know who I was looking for, I found a list of those who had died. The first name on the list in one of the news-papers was Mrs. Aurelia Czerny. When I found her obituary, her maiden name was given as Kuffner. She was Grandpa Kuffner’s cousin. From that point, the story became more than a search about a family tragedy and evolved over eleven years into the book I wrote to memorialize this part of our collective history.”

Your support helps people from near and far research their family stories.

Her book, The Mount Washington Transit Tunnel Disaster, takes readers back to Christmas Eve, 1917. At 3:18 pm, the Knoxville 4236 trolley, designed with a capacity for 59 people but overcrowded with 120, lost control as it descended the steep grade of the Mount Washington Tunnel. As it exited the tunnel, it careened off the tracks, overturned and slammed into a crowd of pedestrians. Witnesses said it sounded like a bomb had gone off. Twenty-three people were killed and more than eighty were severely injured, turning West Carson Street into absolute chaos. Physicians immediately converted the nearby railway offices into a makeshift hospital.

Bystanders frantically searched for survivors among the strewn bodies and twisted wreckage. Many of the victims were women and children finishing their holiday shopping, residents from the close-knit neighborhoods of Mount Oliver, Beltzhoover and Knoxville. Public outrage over the tragic accident led to criminal prosecution, multiple civil suits and the eventual bankruptcy of the Pittsburgh Railways Company.

“The accident and its aftermath were covered in a consistent and detailed manner by many local newspaper reporters from the day it occurred until the Pittsburgh Railways Company emerged from bankruptcy in 1925. But, there is no comprehensive record of the accident or its impact within the community,” Mary Jane says. “My objective was to collect the pieces of the puzzle and tell the story to embed it into our collective memory.”

During the research process, she explored and gathered hundreds of pages of articles from the newspaper microfilms within the Pennsylvania Department’s extensive collection. For weeks, Mary Jane would spend four to five hours at a time reviewing, scanning and documenting articles using the Library’s microfilm reader and scanning equipment. She also relied on Library staff for help accessing historical books and materials about the Pittsburgh Railways Company as well as photographs of Pittsburgh before the Mount Washington Tunnel was built.

Thanks to your donation, family histories can be discovered and shared.

“Over the years, I returned several times to use the microfilms to search for a detail or follow a story thread. Through it all, the staff were exceptionally helpful!” she says.

Mary Jane finished the book in August 2020, after seven years of research and two-and-a-half years of writing, sifting through box after box of materials while meticulously organizing the information she had collected from the Library, various archives, public records and Ancestry.com. It was a time-consuming process. “Each chapter took about a month to write,” she says. Easy access to the Library’s microfilm collection had ensured that the story, including those of the victims, would be well-documented – a fact that is repeatedly noted by those who have read and reviewed the book.

“I grew up going to the Library a couple of times a week. I never tire of being in a library or archive where you never know what you might find. Being among the books and resources allows your imagination to work and frequently be rewarded,” she says. “Learning never stops. Being among primary and secondary sources supports critical thinking in a way Wikipedia does not. Wikipedia has its place, but it is not sufficient to  replace the opportunity to learn or explore provided by a physical library.”

Thank you for helping to support the preservation of our community’s history so future generations have a gateway to the past.