The first wing sauce Jamal Etienne-Harrigan whipped up was green. Really green. Neon green. “Alien green,” he says. “The exact color that comes to mind when you think of aliens. I was really big into the X-Files at the time.”

It was totally by coincidence that he made the sauce in the first place. At the time, he was living in State College, PA gaining notoriety among his co-workers at Red Lobster for the alcohol infused, cocktail-inspired cakes he had begun baking, like the one that tasted just like a Bahama Mama. He wasn’t really into making sauces for wings. He never even thought about it. But a group of co-workers were getting excited about the upcoming Monday Night Football game and all the wings they’d be devouring at the party they were going to, and they wanted a sauce to dip them in.

“I wanted to blow their minds with something non-traditional,” he says. “Something that wasn’t barbecue or teriyaki. And I think I even told them it was going to be something completely off the wall. So, I put my heart into it. And it actually turned out pretty good.”

He called it Area 51. It was made with avocados, jalapenos and tequila. “Now it’s naturally green,” he says of what’s become his flagship sauce. “Back then, I added alfredo and green and yellow dye to make it green. It was definitely a journey to get that sauce to where it is today.”

That was the beginning of The Smokey City’s 412 BBQ, which now offers five bottled sauces and nine dry rubs under the Uncle Jammy’s brand with more flavors in development.

But it’s a journey that didn’t happen overnight. “I’ve caught a few kitchens on fire over the years,” he laughs.

After Jamal moved to Pittsburgh in 2010, the first thing he wanted to do was learn more about dry rubs; different types of seasonings, herbs and spices; and unique and standard pairings that would appeal to people. “I wanted to see what I could get away with in terms of flavors and also, people’s expectations,” he says. “So, I went to the Library to do research.” 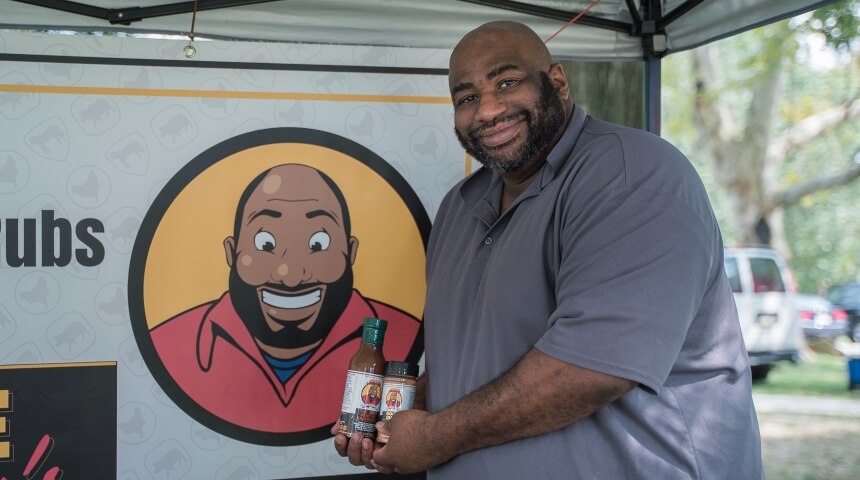 As his dream and overall goals for his business unfolded, he also started digging around online, looking for information that would be helpful to an entrepreneur like himself. “That was the trail of breadcrumbs that led me to the Library’s website,” he says. “And there it was, staring me in the face: Book a Librarian.”

And so, on a random Saturday, Jamal walked into CLP – Downtown & Business. “The librarians just happened not to be busy at that time, which was unusual,” he says. “Typically, you had to schedule an appointment ahead of time. But all the staff down there did a magnificent job of pulling information for me. I had a huge wish list and they found so many books that were relevant with regard to sales data and other numbers.”

The Library proved to be a one stop shop. In addition to working with librarian Kris Mielcarek-Sharpe, Jamal also became a regular attendee of BizFIT, run by the Riverside Center for Innovation, an independent entrepreneurial training program and partner of the Library.

These days, Jamal has his sights set on growing his catering business and expanding into the wholesale market. “Last year burned me out going to farmers markets,” he says. “Monday, I was in Robinson. Tuesday, Bethel Park. Wednesday was Bellevue. Thursdays in Market Square. Friday in Forest Hills. Saturday, Mt. Lebanon. I tried Carnegie for a couple of weeks on Sunday. I’m not gonna lie; I did push it a little too hard. But sometimes you gotta push it to the limit.”

Jamal’s vision for his business goes beyond something delicious to eat. He wants to give people a locally produced product that looks good and tastes great, but also reflects strong community values. The Smokey City’s 412 BBQ is about social change; serving as a caring and innovative employer who works with individuals and communities to bring peace and love back to the dinner table.

The business resources available to Jamal at the Library have proved invaluable, especially as he expands and grows, moving forward and mapping out a plan to get a co-packer to jar the sauces. Which means he’ll need to research a lot more information to ensure he’s always making the best decisions. And he knows exactly where he’ll go to find it.

“You have everything you need at the Library: the A to Z’s,” he says. “It’s definitely a resource that was just waiting to be tapped.” 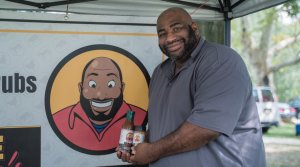 You are the secret in the sauce!

Your support helps budding entrepreneurs get their businesses up and running.