It’s my favorite time of year—hoodie weather!— and my favorite way to watch movies this time of year is on my couch swaddled with blankets on blankets until I resemble a burrito of fabrics.

Nestled in all this cuddle-tastic bedding is also the perfect way to watch scary movies, but with so many horror movies to choose from (they are the cheapest to make, after all), how do you know which ones you’ll like? Just in time for Halloween, here are some great movies you may have missed that scratch a similar itch of your previous favorites.

The Movie You Saw:

A nanny at a creepy English house starts experiencing some strange occurrences, all of them tied to the titular boy, who’s actually a porcelain doll. Available in most libraries’ best seller collections.

The Movie You May Have Missed:

Just seeing the poster for this sold me on it, but I wish I’d known it was from New Zealand before watching it, if only to prepare myself. Those Kiwis have a really interesting way of mixing in humor with their horror (See also: Black Sheep), but don’t let that turn you off from this film. With a strikingly similar premise to The Boy, but without the ridiculousness of a living doll, Housebound combines frights with fun.

A cheeky mashup of every single horror movie trope, from inbred mountain hicks giving directions to secluded, salacious teens. I simply love this perfectly meta film, even if the ending is a bit extreme.

I don’t know if this movie is more or less self-aware of horror tropes than Cabin in the Woods, but it certainly is more fantastical. And it’s got a lot of heart pumping out all the cheese-tastic gore.

The movie that finally answers the question of just exactly how Tom Cruise is still jumping around doing Mission: Impossible and Jack Reacher movies. Brad Pitt also being a vampire makes sense as he tells Christian Slater the story of his descent into vampirism. It’s atmospheric and delightful seeing Cruise and Pitt vamp around like dandees.

All right, now I’m being cheeky. In the style of great shows like Parks and Recreation and okay shows like The Office (either version), this is a literal interview with vampires, from the guys behind Flight of the Conchords and the adorably quirky Eagle vs Shark.

Any horror comedy, like Beetlejuice, Tucker & Dale vs Evil. Any haunted house movie, like The Conjuring, The Haunting or House on Haunted Hill. Any of the movies listed here. Basically any horror movie.

I guarantee this isn’t what you think of when you think of Japanese horror. Nobuhiko Obayashi’s House is a trip and a half and really deserves its own gushing post; trying to summarize it does the film a disservice. Almost a live-action anime, you can watch it as a straight horror movie (in which it hits all the major horror tropes, albeit in hilarious ways) or you can watch it as a comedy (in which it’s so self-aware, it names the characters after archetypal stock characters, like Kung Fu for the jock, Prof for the nerd and Gorgeous for the pretty one). It is both charmingly retro and blazingly ahead of its time. In fact, if the internet had been around back in 1977, I have no doubt this film would have been a huge hit that would have changed the face of horror comedy, perhaps even becoming a bigger horror comedy hit than the original Ghostbusters. House is, without hyperbole, the most unique film I’ve ever seen, unlike literally anything else and finally explains why this is a thing:

What will you be watching this spooky season? Let us know in the comments below! 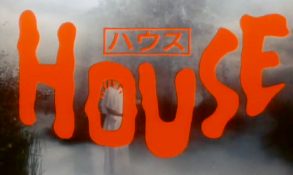 Try something boo, erm, new (so sorry about that):

Ross works as a Clerk at the Mt. Washington branch of the Carnegie Library of Pittsburgh. He loves reading books and watching movies and will often ramble about the two here. He’s currently comfortably drowning in wool comforters.