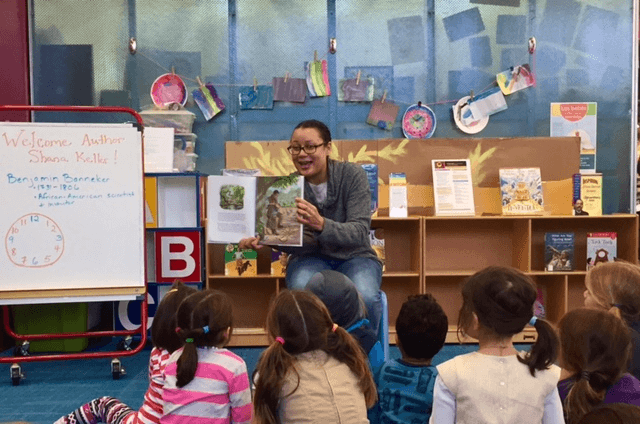 As Shana shared Ticktock Banneker’s Clock with a group of young school age kids, she captivated the crowd with her engaging storytelling.  Shana encouraged the kids to think about the various challenges that Benjamin Banneker faced and the problems that he creatively solved as he worked to create his own working clock. After the book, the kids continued to think about the mathematics and science behind clocks through hands-on exploration stations.

There was a take-apart station where kids used tools and magnifying glasses to deconstruct and study a variety of digital and analog clocks. The kids enjoyed discovering the gears that were inside of both types of clocks.

Participants also had fun constructing paper watches using recycled toilet paper tubes.  This was a great way to talk about how to tell time with analog clocks.

The third station was a gear construction set.

One of our favorite parts of author visits is being able to meet the people who create the stories in books.  We asked Shana three questions.

If you would like to learn more about Shana Keller Selway, you can connect with her online at www.shanakeller.com or follow her on Twitter at https://twitter.com/shanakeller

At the end of the program, Shana gave the Library a signed copy of her book! We have added this book into our collection, so if you stop by the Carnegie Library of Pittsburgh – Squirrel Hill, you might find the signed book!  We hope to read more of her books in the future.

Megan F. is the Library Service Manager for Children’s and Teens at Carnegie Library of Pittsburgh – Squirrel Hill.  She enjoys exploring the world with her very active three year old son.