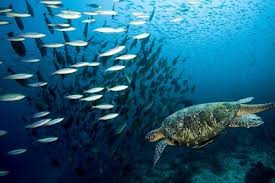 The recording program of the Library for the Blind and Physically Handicapped (LBPH) has produced more than 200 audiobooks in the past ten years.  One of the most unusual of these was Russell Hoban’s 1975 novel Turtle Diary (DBC 08138).  The book’s structure — each chapter is a diary entry alternating between the two main characters, William G. and Neaera H., representing their thoughts rather than spoken dialogue — posed special challenges for the book’s narrators, Marty Lieb and Thelma Snyder.

William is a solitary, divorced ex-ad man, living in a rooming house, and employed at a bookshop in London.  Neaera, an unmarried, successful writer of children’s books (as was Hoban), is at the moment unable to write (or sleep).  Constrained in their personal lives, each independently becomes transfixed by the plight of the captive sea turtles at the London Zoo, and each becomes obsessed with finding a means to set the turtles free.  Then Neaera walks into the bookshop, and sets in motion the events that will transform their lives.

“At three o’clock in the morning I sat in the dark looking out of the window down at the square where the fountain is not and I thought about the turtles.  The essence of it is that they can find something and they are not being allowed to do it.  What more can you do to a creature, short of killing it, than prevent it from finding what it can find?  How must they feel?  Is there a sense in them of green ocean, white surf and hot sand?  Probably not.  But there is a drive in them to find it….”

Their quest to free the turtles is of course a metaphor for their own lives.

Thelma Snyder and Marty Lieb both saw their characters as struggling to break free of constraints.  Although they recorded independently, both approached their work in a craftsman-like way, first reading to gain insight then marking their scripts to create emphasis, adding pauses and inflections and checking the pronunciations of unusual words.  Thelma comes from a Theater Arts background, and through word-of-mouth, discovered the LBPH narration program.  She finds it gives her the same satisfaction Theater has, working with a microphone to portray a character.  Turtle Diary was Marty’s first narration with the program, although he had previously done digital editing.  He says he has found narrating especially rewarding.  Formerly a stutterer, Marty began doing stock reports on KQV radio, and later spoke publicly at his church prior to auditioning for LBPH’s narration program.  Both have recorded numerous books for the Library, and through their efforts have made these literary works accessible to thousands of readers.

In “The Moment Under the Moment,” a 1992 collection of his writings, Russell Hoban discussed what motivates him as a writer:  “The most that a writer can do — and this is only rarely achieved — is to write in such a way that the reader finds himself in a place the unwordable happens off the page.  Most of the time it doesn’t happen but trying for it is part of being the hunting-and-finding animal one is.  This process is what I care about.”

Marty and Thelma’s narration allows the listener the opportunity to experience “the unwordable.”