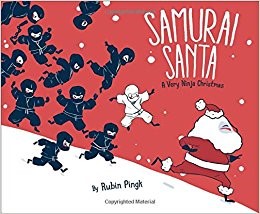 LBPH is proud to share a new locally produced title available for loan or for download from BARD Hidden History of Pittsburgh was narrated and edited by Ronnie Mazzotta.  This audiobook was carefully monitored, by the LBPH Studio Team and Volunteers, and produced by Ronnie Mazzotta

Samurai Santa: A Very Ninja Christmas
By Rubin Pingk
DBC14821
A young ninja wants a snowball fight for Christmas, and he just might get his holiday wish in this picture book with graphic novel–inspired illustrations that celebrate the spirit of giving, Samurai style.

It’s snowing on Christmas Eve! Yukio loves snowball fights, but none of the other ninjas will play with him for fear of landing on Santa’s naughty list. Can Yukio chase Santa away from Ninja Village, or will a Samurai Santa thwart Yukio’s plan? An epic snowball fight later, one thing’s for sure: this is going to be Yukio’s best Christmas ever.