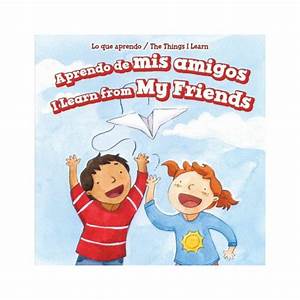 Geared towards children from preschool to second grade, the books interweave simple, concise  sentences in both Spanish and English on every page, and teach the simple lesson that learning takes place within many types of relationships.  The format is an excellent way to introduce young children, and even adults, to simple phrases in both languages.  The bilingual recording is followed by the identical text all in Spanish specifically for the Latinx community.

Other Spanish language books the students are recording include a story by baseball player Alex Rodriguez, ¡Jonron! or Home Run!, inspired by events in his own life and another by Puerto Rican poet Ina Cumpiano, El Vecindario de Quinto, about the diverse people of the neighborhood.  So look for all these upcoming books to teach simple English and Spanish to the children in your life, and to brush up your own world language skills!