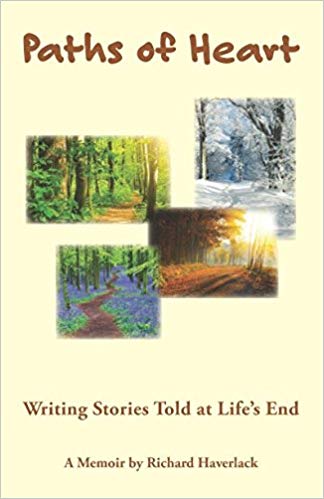 “Death and dying are radioactive topics.” So says Richard Haverlack, author of Paths of Heart—Writing Stories Told at Life’s End (DBC 16051). Haverlack, who personally recorded his book for the LBPH narration program, began his own journey into this realm following the death of his father and later his beloved Uncle Frank who struggled in a hospital setting in his last days, before being moved to hospice. Haverlack was so impressed with the palliative care Frank received there, along with the dignity he was afforded, that he became a spokesman for the benefits of hospice care generally. He eventually became a volunteer at Good Samaritan Hospice, offering to write the memoirs of end-of-life patients, his “writing partners,” to record the important aspects of their lives as a legacy for their families and as a tribute to themselves. Paths of Heart includes both his own personal story evangelizing for hospice care and the details of his encounters with six writing partners.

Haverlack explains that there are certain conditions that must be met in order for a memoir to be possible: The individual must have enough time left to interview in several sessions, they must have adequate stamina and cognition, and a desire to tell their story. As an interview proceeds, he looks for something that might be meaningful and which will engage the reader. He says, “They weave a tapestry. I look for a loose thread to tug on….If they mention something frequently, it may be important. I look for the threads to coax the story out.” In Paths of Heart the personalities of his writing partners shine, and the stories they reveal are touching, surprising and even startling. Haverlack adds that although people often run from the subject of death, hospice care and the memoirs bring dignity and meaning to this natural final phase of life, for both the patient and their families.

One of Haverlack’s goals is to instruct how to approach writing others’ memoirs (as opposed to biographies for example) and he has taught “how to capture and write someone else’s story” at the Osher Lifelong Learning Institute at the University of Pittsburgh.

A word about hospice: Haverlack explains that hospice care is not curative, which is the aim of hospital care. It is oriented to the comfort of the patient. Hospice workers are expert at dealing with end-of-life needs and he points out that is not the mission of hospitals. He says that 98% of hospice care is done in the home, until the individual requires inpatient care, and some tasks can be delegated to the family with instructions. He adds there is no financial barrier to hospice palliative care; it is covered by both Medicare and Medicaid. Hospice also provides grief counseling to families following the death of their loved one.

The writing partners portrayed in Paths of Heart are fascinating. It is not a depressing book. It is life affirming, and the author provides a wealth of insight into this natural and inevitable phase of life. Paths of Heart—Writing Stories Told at Life’s End is available on Amazon and through the Carnegie Library system. Proceeds from the sale of the book go to the Good Samaritan Hospice.