A few months ago, a colleague and I were browsing the new picture books and started talking about the books we loved as children and how we never realized how incredibly complex and even subversive the content was. Some of our most beloved books could be considered wildly “inappropriate” for our then “young and impressionable minds.”  Picture books are not just for kids.  They are multifaceted and at the forefront of—and sometimes precede—social change.

Picture books are special—they bring to life controversial subjects such as politics and LGBT rights. Some picture books are overt in their messaging, such as the much beloved And Tango Makes Three by Justin Richardson and King & King by Linda de Haan.  Both are picture books that portray alternative lifestyles with humor and heart. Others are subtler in their advocacy such as, This Day in June which is a fantastic book that depicts an LGBT pride celebration and Worm Loves Worm which uses the sweet story of two worms in love to discuss marriage equality.

Picture books are also a vehicle for political activism. One of the earliest examples of a subversive children’s book is Munro Leaf’s The Story of Ferdinand, which was published in 1936 during a time when antiwar sentiments were very unpopular.  Ferdinand, a little bull in Spain, is a pacifist that liked to “just sit quietly and smell the flowers.”  When he’s taken to the bullfights in Madrid, Ferdinand refuses to fight and is eventually returned to his pasture to continue his peaceful life. Another more recently published picture book that earned its place in subversive picture book history is Doreen Cronin’s Click Clack Moo. A seemingly innocuous book about cows that like to type contains pro-union messaging.  The cows want electric blankets and write their demands to “the man in charge” aka Farmer Brown.  When Farmer Brown denies the cows their blankets, they go on strike and refuse to produce milk until their demands are met.  The duck, as an impartial party, acts as the negotiator, delivering offers and counter offers to the cows and Farmer Brown.

I would be remiss in writing about subversive picture books if I didn’t mention the great Maurice Sendak. Sendak was really a pioneer when it came to depicting children as anything but timid and wholesome.  The characters in classics such as Where the Wild Things Are, Pierre and In the Night Kitchen are contrary, mischievous and adventurous.  Sendak’s books are so controversial they frequently appear on challenged/banned books lists.

In addition to being a platform for change, picture books can be fun reads for adults. Books full of dark humor such as I Want My Hat Back, Tadpole’s Promise and I’m the Biggest Thing in the Ocean delight us librarians often more than the children we read them to.  If you’re interested in learning more about children’s literature and the history of subversive picture books, stop by your local library and check out the wonderful book, Wild Things! : Acts of Mischief in Children’s Literature by Betsy Bird.

Maddie is a Children’s and Teen Librarian at the Squirrel Hill Branch.  She enjoys reading, frolicking with her felines and travelling to far off lands. 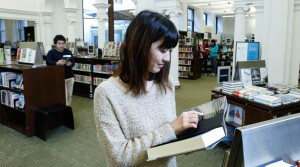 Check out Wild Things! : Acts of Mischief in Children’s Literature