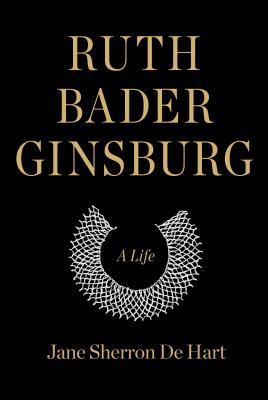 “The Notorious R.B.G.”  Now a cultural and legal icon, the 85-year-old Ruth Bader Ginsburg’s initials are emblazoned on T-shirts worn by a much younger generation of fans.  She recently described herself as “a flaming feminist,” but in truth her views on the equality of the sexes are both a reflection of the careful logic of her mind as well as a gradual evolution in her outlook as she overcame obstacle after obstacle in her own legal career.

Some of the inequities she dealt with included the following:  One of only nine women out of 552 students in her Harvard Law School class of 1959, she was not permitted to enter the library’s periodical room, considered a male domain.  After graduating from law school first in her class, she was unable to find work, most job postings saying “men only.” On her first job, when she informed the personnel office she was pregnant, she was demoted to clerk-typist and told she would have to leave her job altogether when the baby arrived. When she began her teaching career at Rutgers University in 1963, there were only 18 female tenured law professors in the entire country.  Finding she was being paid less than her male colleagues, she sued the University and won.   These are just a few examples of the biases she and other women faced at the time.  In the l970s she was a path-breaking advocate for the ACLU, advancing the cause of gender equality, and in her career she also represented male plaintiffs who had been disadvantaged by laws ostensibly favoring women while in fact perpetuating gender stereotypes. Interestingly, feminist groups were ambivalent about her candidacy for the Supreme Court because of her criticism of Roe v. Wade for focusing on the right to privacy rather than equal protection under the law.  But she was confirmed by a nearly unanimous margin that would be impossible in today’s political climate.

Ruth Bader Ginsburg: a Life (DB 93120) by Jane Sherron De Hart is a current bestseller.  At 24 hours of listening time it is lengthy, but comprehensively covers Ginsburg’s private, public, legal and philosophical life.  Although unauthorized, it was written with the cooperation of her husband, children, friends, and associates, and the author interviewed Ginsburg several times.  It discusses her Jewish heritage, family life, career trajectory, and personal fight against discrimination among other topics.

The biography for younger readers (grades 3 – 6), Ruth Bader Ginsburg: The Case of R.B.G. Vs. Inequality by Jonah Winter (DBC 12103), is an LBPH production, part of the Pittsburgh Public Schools Obama Academy narration program and is read by student Aubree Peterson-Spanard.  The book puts forward fact after fact describing Ginsburg’s experiences from girlhood through law school and later as a lawyer and judge, as if in a courtroom setting, with the reader as the jury rendering a verdict on her life.  The author’s “summation” reads in part, “At any number of points in her life, Ruth could have given up…She could have dropped out of law school. She could have abandoned her search for a job. She could have accepted being paid less than her male associates. Instead she stayed on the difficult path she chose for herself, removing one obstacle after the next—until she arrived at the very court that is the symbol of justice in America.”

Both books are eye-opening and worth reading for anyone interested in learning more about Ginsburg’s remarkable life.