The following is a guest post from one of CLP’s wonderful volunteers, Dany Diaz Mejia about his experience with self-directed learning at the Library. Dany moved to Pittsburgh for graduate school, and loved it so much, he didn’t leave. A major library fan, Dany has been a volunteer with CLP’s Library Outreach and Community Advocacy Leaders team since 2016, helping to bring library programming and information to community members at events and festivals throughout the city. In his spare time, Dany enjoys reading and writing.

A lot happens in five years: falling in love and breaking up, finishing school and starting work, making and losing friends, losing and gaining confidence and, above all, learning, lots of learning. Five years can be full of turbulence, but you can get through them with the help of a good anchor. In my case, I found the Carnegie Library of Pittsburgh.

Of course CLP is a great resource for general inquiries, such as career fairs, nonprofit management or the role of data in our everyday lives. But it can also fuel the most diverse curiosities, which in my case range from diversions into Japanese animated films, to the history of Flamenco, to a close look at Latin American literature. I’ve learned that the pursuit of these interests can help you survive the loss of a love, the departure of good friends, the adventures of long Greyhound bus rides and the grayness of cold winter days in Pittsburgh.

Last year I took several journeys of self-directed learning that anchored me. I want to share three of them with you:

The Life and Work of Jorge Luis Borges

I first read Jorge Luis Borges’ short story “The Garden of Forking Paths” in college. At the time, his writing struck me as self-important, so he quickly joined my unofficial list of unreadable writers. Seven years later, I watched one of his lectures on YouTube. This tall, soft-spoken, proper, quick-witted and almost translucent man captured my imagination. He spoke without notes and quoted poetry in English, French and German, stopping only to translate them into Spanish, for an audience captivated by the power of his memory. I had to know more about him.

I visited CLP, checked out his complete short stories, two of his biographies and a book he wrote on imaginary beings. I read one of his short stories every night for two months. His originality, his choice of adjectives and his obsessions with labyrinths, mirrors, doubles and daggers mesmerized me. Then I learned he grew up surrounded by books, saved—like me—by words. His idea of heaven was an unending library, which is very poignant, because soon after going blind, he became the director of the National Library in Argentina. Despite achieving world-fame, he often felt like a type of impostor, unworthy of his gifts, but grateful for the “generous injustice” of life. I highly recommend his short stories, lectures and biographies.

Imre Kertész, the Hungarian Nobel Prize recipient in 2002, passed away this year. I read his novel Liquidation, and was moved by the power of his descriptions of how hard it is to rebuild life after trauma and war.

Jorge Luis Borges is also remembered in 2016. He passed away 30 years ago (see journey one above).

Eighty years ago, the Nationalist forces executed Federico Garcia Lorca, one of the most talented Spanish writers of the last century, during the Spanish Civil War. His body has never been found. I recommend reading the poems he wrote while living in New York City.

Two of the most prominent writers of the English and Spanish language died four hundred years ago. I’m talking, of course, of William Shakespeare and Miguel de Cervantes. If you want to laugh out loud while reading, I highly recommend Don Quixote.

The Mysteries Behind the Films of Hayao Miyazaki

The first Miyazaki film I watched was Spirited Away. I heard about it in 2002, when it got nominated for Best Animated Feature for the Oscars, and made a note of it in an old diary. Years later I didn’t remember what the film was about, but I saw the note and looked it up at CLP.

The deep friendship between the young girl, Chihiro, and the young boy, Haku, moved me. Then the references to Japanese mythology, the representation of consumerism and the exploration of identity made me want to watch more of Miyazaki’s films. I started by making a list of all his films in chronological order and then I tracked each of them at different CLP locations around the city. I requested them to be sent to my home library and I started one of the most visually stimulating journeys of my life.

In addition to these learning journeys, the Carnegie Library of Pittsburgh is a place that makes me feel safe. I get inspired by community members teaching English or facilitating writing groups to make sense of life. I am at times overwhelmed by the largeness of its scope, the diversity of its books, and the variety of its outreach projects. This access that remains a dream in so many parts of the world, fills my heart with gratitude. 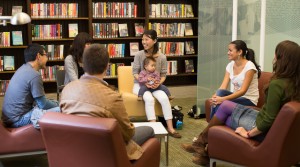 What Will Your Library Help You Learn in 2017?

Where will your CLP journey take you in 2017? Let us know in the comments!