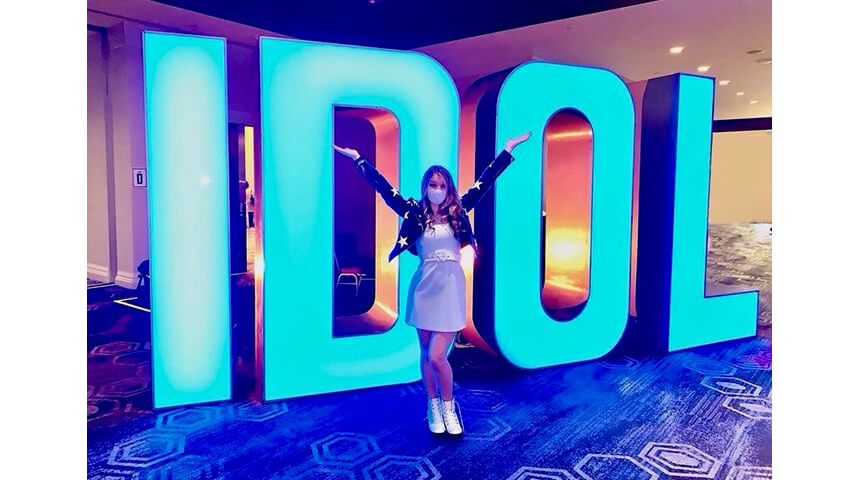 The first audition for American Idol wasn’t intimidating at all for 16-year-old Fox Chapel sophomore Sloane Simon. “It was virtual. I was in my kitchen and my mom was with me,” she laughs. But out in California? Walking into a room where celebrity judges Katy Perry, Luke Bryan and Lionel Richie were sitting there, waiting? “Terrifying,” she admits. “They were all just staring at me and it felt like the air was sucked out of the room. I was really nervous. But I had no expectations. I was just there for the experience. I just wanted to go there and do my best.”

Which she did. Picking up her Taylor acoustic guitar, an instrument she has been playing since the age of eight, and singing two songs, “Brand New Key” by Melanie, as well as an original of her own, entitled, “Laurel Canyon,” an homage to the California music scene in the ’60s and ’70s.

“Lionel gave me the biggest compliment of my life. He said, ‘I was part of that era… and I think you would have fit in well.’ It made my heart soar,” she says. She walked out with three “yes” votes from the judges, a Golden Ticket to the next round. She remained in California for two weeks, attending Idol School, “Basically home school from the set,” she explains, and making it all the way into the Top 60 before being eliminated. “I have a smaller voice in a belting competition, but I made it incredibly far and I’m so proud,” she says.

Music has always been the way she connects. To herself. To other people. Her songs are relatable and can easily resonate with just about anyone. “I always try to release songs that another teenage girl can listen to, like, ‘Wow the same douchy guy did the same to me, too,’” she laughs. Sometimes her songs begin as a single lyric she begins playing around with. Other times, it’s a melody. There are songs she writes that she finishes quickly and others that she puts down and returns to years down the road. “Cool,” was one of them. She began writing it in middle school and finished it a few years later, lyrics that were tweaked to reflect what she was seeing, hearing, experiencing… in her own life and within the halls of her high school.

“The waves they crash, drown out the noise, for all the pretty girls and boys. She’s acting like she don’t care, blows her smoke into the air. She sells her soul to fit in there. She thinks it’s cool, I don’t understand. What are the secrets that you hide in your head? What are the moments you can’t seem to forget? What makes you so invincible?”

“High school isn’t like ‘High School Musical,’ she says, reflecting on the lyrics. “There’s a lot of cliques and a lot going on.”

She submitted the song to Carnegie Library of Pittsburgh’s Teen Media Awards, a competition that is divided into The Ralph Munn Creative Writing Awards and the Labsy Awards, both of which invite reflection: on beauty, the complexity of life, and joy where we find it. More than 200 young creatives, including visual artists, inventors, filmographers and musicians submitted their original content in 2020. “Cool,” was her submission to the Labsy Awards. It won first place in Music.

“Labsy is a fantastic opportunity. Winning a Labsy Award has meant so much to me and I thank the Library for giving me the confidence to keep reaching with my music,” she says.

Pittsburgh has always served as a supportive, welcoming environment for her. She’s played the Three Rivers Arts Festival, Millvale Music Festival, Ladyfest Pittsburgh, and at various venues in town. Same for California (in addition to American Idol, she enjoyed a 2018 performance at The Viper Room in West Hollywood in 2018), Florida, singing at Universal Studios in Orlando, and even Nashville, where she spent her spring break gracing the stage of the famed Blue Bird Café in 2019.

There are hundreds of unfinished songs floating around in her collection, waiting for the perfect note, lyric, experience to fuel its completion. In the meantime, she’s focused on recording an EP with many of her songs available for digital download on her Officially Sloane Facebook and Instagram pages. Recently, she was chosen as a 2021 National YoungArts Foundation winner, has seen her songs being played on WYEP FM, and looks forward to performing live again as the country begins to re-open following the pandemic.

Pausing, she reflects on the guitar she received at the age of eight, which was given to her to keep her occupied while her mom underwent chemotherapy. “The first song I wrote was about being brave when you’re scared. I can’t even remember the song or the melody, but I guarantee it was not good,” she laughs. “I didn’t even realize back then that something I took up as a distraction could turn into my greatest passion.”

Are you a teen who loves to create?

Learn more about the Labsy Awards