When I was younger, my mom and I used to watch this show on A&E called Agatha Christie’s Poirot.  At the time I called it (clearly mispronouncing) Par-ett, and fell into admiration of the little mustached man who would solve crazy mysteries. My mom loved mystery books so she was always able to guess who had committed the crime. I was less able to do so, but in my defense I had little to no mystery experience and I was still in my fantasy book phase: think young awkward middle school age.

As I started to work for the library I encountered the Agatha Christie books but never made the connection between the book series and the show until recently, having grown up calling it just Par-ett. Within the last few months I finally decided to try one of the books. I choose Murder on the Orient Express. The trailer for the movie adaptation piqued my interest. I downloaded it on Overdrive and was hooked within the first chapter. Halfway through the novel I ordered the first in the Hercule Poirot series, The Mysterious Affair at Styles, to ensure a continuous influx of Poirot. 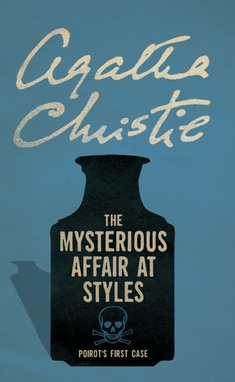 Part of the appeal, besides my penchant for British accents, is that I essentially grew up with these stories. Now I get to re-explore them as an adult and remember all the happy memories of watching the mustached man with my mom and a big bowl of popcorn. Both Murder on the Orient Express and The Mysterious Affair at Styles were surprising. Although my ability to guess ‘whodunit’ has improved, I could not figure these mysteries out until they were revealed in the very last chapter. Any book that can catch me by surprise goes on the ‘forever list’ for book suggestions. Despite the numerous characters, I didn’t feel overwhelmed remembering names and connections. Agatha Christie took the time to introduce each character, explain who they were connected to and-more importantly-why.

Another book in the series happened to download as I was writing this post… clearly it’s fate. Although I have a long road ahead of me, around forty titles in the series, I am ready to dive right in and solve mysteries alongside the clever little mustached man.