The Carrick location is the most recently renovated library in the CLP system, having recently reopened their doors after nearly 18 months of work. I was lucky enough to have outreach in the neighborhood on the day the Carrick location reopened, and I could not wait to walk over and look at the brand new building.

CLP – Carrick boasts several unique and modern features in general, including a rain garden, which serves as a natural temporary catch for water runoff from roofs, driveways and lawns. This particular rain garden also has underground storage tanks and a pump system that will store excess rainwater that will later be used to water parts of the garden.

Carrick is also the continent’s first Passive House library. The Passive House architectural style includes specialized insulation and window coatings that retain the warm of the sun in winter, and strategically placed overhangs and awnings that work to cool the building naturally in the summer. Passive House buildings are designed to have a minimal environmental impact by lowering traditional heating and cooling costs by up to 75%.

While those aspects of the Carrick location are very exciting, and probably what you have already heard much about, we’re here to talk about the Children’s space. I asked Children’s & Teen Specialist Jon about some things that make Carrick’s Children’s space unique and he said, “The tank and pump aspect of the rain garden is emphasized with a permanent  water droplet art installation that overhangs the early learning section of the Children’s space. Also in the Children’s space are four kinetic bird sculptures (a murder of crows) that were handcrafted and painted by an artist in Colorado.  These four birds circle above the kids’ PCs in the school age section of the space.” 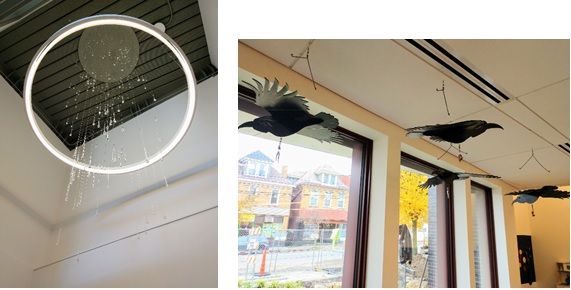 One of my favorite features of the Children’s space is a large section of wall that is magnetic. It’s back in a little corner that seems dedicated to the youngest CLP visitors, and also holds a pretend kitchen, board books, a comfy chair, and fun, nesting chairs that can easily double out as a building toy. I love the magnet wall for how it appeals to young children’s desire to stick things on “non-traditional” places, but also because it is a great way to show young children that letters and words are everywhere, not just in books. 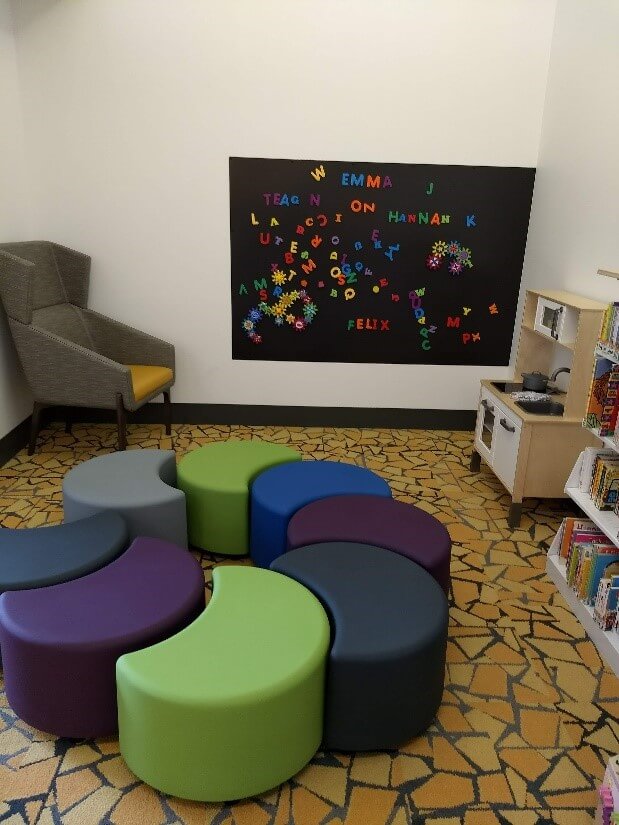 If you have young children who need a different place to play, an artistic elementary schooler or an environmentally conscious tween, you might want to pay a visit to the brand new, still smelling like fresh paint, CLP – Carrick.