Summer is around the corner. The sun is shining…. Okay, in Pittsburgh, the sun is sometimes shining but the temperature is getting warmer! With the heat, I like to think of an incredible animal book to read.

Last year, I studied bees and learned a great deal about how honey is made, and the bee crisis currently going on. This year, a new book arrived on my desk and I knew immediately what animal I would be reading about this summer. Joan Procter, Dragon Doctor: the Woman Who Loved Reptiles by Patricia Valdez tells the incredible story of an amateur scientist who studied reptiles but who was most famous for her relationship with the first live Komodo Dragons sent to the London Zoo in 1927.

Little was known about the Komodo Dragon in Europe and she recorded many of the early observations about these animals. Joan would take walks around the zoo with one of the Komodo Dragons steering it with its tail, and even attended children’s tea parties. After watching a few documentary videos about Komodo Dragons, I find the idea of one attending a child’s tea party slightly concerning.

Of course, then I started wondering and imagining how dangerous a Komodo Dragon could be and read, Who Would Win? Komodo Dragon vs. King Cobra by Jerry Pallotta. The toxic bacterial laced saliva should have been a clue to the power of these scary but amazing creatures. I always think the best kind of summer reads are the ones that freak you out just a little bit.

Who do you think won the challenge, the Komodo Dragon or the King Cobra? Read these books to learn more about Komodo Dragons and maybe you can be an amateur herpetologist or reptile scientist like Joan Procter—but only if you aren’t afraid of snakes, lizards and other dangerous reptiles. 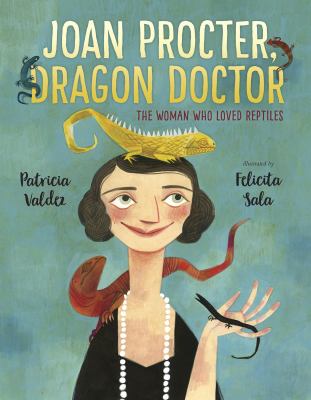 Looks at the inspiring story of Joan Procter, a pioneering female scientist who loved reptiles.