Unbelievably honest. This is one of the first testimonies on the terrorist group’s war crimes in Western Africa. This true story gives you a glimpse into the life of Patience Ibrahim in her efforts to flee Boko Haram. Filled with courage and pain she tells her story to entrusted journalist Andrea Hoffmann to share with the world.

At a young age Patience wanted to have a family, but she never expected her life to go in the direction it did. Having been married off, her family was happy and relieved to have one less mouth to feed. Unfortunately, her husband Yousef, was killed by Boko Haram terrorists for being a Christian shortly after her marriage. Yousef’s family didn’t think her presence to the funeral was required. She walked back to her home village of Ngoshe. No one in her village expected to see her again so soon. Shortly after her arrival, she assisted her Uncle’s family by cooking and cleaning. Her heart was very heavy with the loss of her husband and the pressure that was put back on her family. Traditions in Nigeria made her feel unwanted because she was “used”. Her prospects were worse than modest.

After many months had past, she was in a routine until one day she had a second chance. Every day she had walked many miles to retrieve water. One day while she was there a man named, Ishaku, approached her asking her name. He was very handsome and “suddenly, once again, there was so much more than what had filled my time over the past few months. I was a woman, a beautiful woman.” She and Ishaku met many times and he wanted her to be his second wife. She was not fond of the idea of sharing, but it was better than not having a husband. She met his kids, first wife, and they had a ceremony of marriage. Although it was much different than the first marriage, Ishaku preferred her and spent most of his time with her. As the months past, Patience was learning the family dynamics while working in the fields and other chores. She was very happy to find out she was pregnant…..this is when everything takes a turn for the worse. She was kidnapped by Boko Haram terrorists and the story continues of her journey through hell.

This story is not for the faint of heart. At times, while telling her story to Andrea Hoffmann, Patience disappears for days because the recalling of her story is too much for her to handle. It includes stories so horrific that they are unimaginable. Patience is a woman of great courage and perseverance. It is a recollection of the eye- opening events that sadly happen in our world. 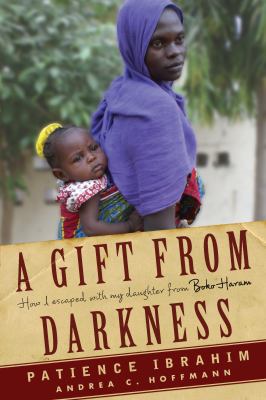 A Gift from Darkness

Unbelievably honest. This is one of the first testimonies on the terrorist group’s war crimes in Western Africa. This true story gives you a glimpse into the life of Patience Ibrahim in her efforts to flee Boko Haram.