In the harrowing 2015 book, Missoula: Rape and the Justice System in a College Town, author Jon Krakauer chronicles the rape cases of several young women in Missoula, Montana, a town which houses a large state university with a competitive and popular football program.

The author dispassionately, but thoroughly examines the successive road blocks put up by the police, prosecutors, the university, and the community, after a local young woman comes forward with rape allegations against a football player. Krakauer also systematically explains and refutes deeply rooted misconceptions that Missoulans and most Americans share about, what rape is, who can be raped, and who can be a rapist.

Recently the news media has been flooded with stories about rape allegations, particularly on college campuses and often involving athletes. If you are interested in a thoroughly researched and rivetingly exposed microcosm of this national dialogue, check out Missoula. 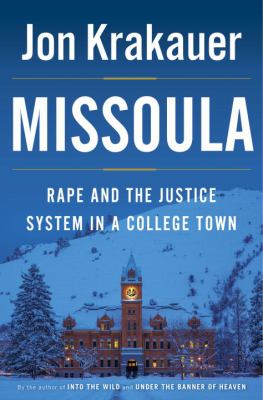 Missoula: Rape and the Justice System in a College Town

Jon Krakauer chronicles the experiences of several college age women who were raped in Missoula, Montana, examining the traumatic physical and emotional repercussions of the act itself and detailing the exhaustive process of pressing criminal charges and prosecuting their attackers.