He tells her that he is practicing Tai chi. That’s a martial art that sends good energy, known as qi, through the body.

Grandpa offers to teach her some Tai chi. He teaches her three different moves, one call Pick Up the Needle from the Sea Bottom and another Cloud Hands.

The last one she tries is Play the Lute though she imagined herself playing a guitar for the daisies. Now that Mei Mei knows some tai chi, she wants to teach her Grandpa the yoga that she has learned in school.

She teaches Gong Gong, Downward Dog, the Cat pose and the Mermaid pose, though Grandpa thinks that it should be called the Pretzel pose instead. She also teaches him Tree pose.

Lui’s words and Forshay’s pictures make you want to bend and twist to do all of the different moves. But more importantly, this quiet story inspires readers to spend time with someone special. 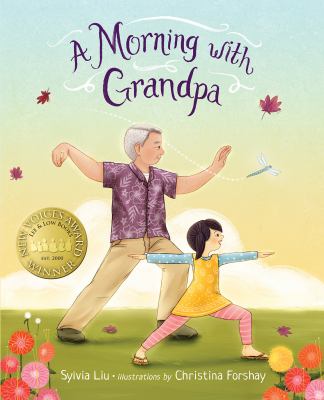 A Morning with Grandpa

Curious and energetic Mei Mei attempts some t’ai chi forms as her grandfather demonstrates them, then tries to teach him basic yoga poses. Includes introductions to t’ai chi and yoga, as well as instructions for the exercises described in the text.