We may be a few years past the 10th anniversary release of Neil Gaiman’s American Gods, but with the STARZ television adaptation around the corner I thought it would be good to revisit one of my favorite Gaiman novels. Admittedly it’s the only one I have read, but I like to think if I made my way through any of Gaiman’s other books I would still enjoy American Gods best. It also seemed appropriate to check out a different version of the book as well.

A quick search for “American Gods” or “Neil Gaiman” on the Overdrive app will bring library patrons to either an ebook or audiobook version of this title. I have been on the hunt for good audiobooks so I went with the latter which is narrated by Dennis Boutsikaris, as well as Neil Gaiman himself. There is a whole cast of voice actors bringing the various characters of American Gods to life. Imagine the many different pantheons of deities in mythologies around the globe, and yes a decent amount make their way into the book. There may even be many readers are unfamiliar with too.

American Gods takes readers on a trip across the United States many have tried to follow since its publication in 2001. Along the way, Shadow and Mr. Wednesday meet a fascinating array of gods and goddesses, spirits and supernatural beings all living the American dream just like the normal folk who worshipped them years ago. An approaching storm prompts Mr. Wednesday to rally his fellow immortals to face off against the ever changing cast of new gods being born out of modernity in America. It is surely a tale to appeal to, and entertain, fans of many different genres, especially those who love a good myth. 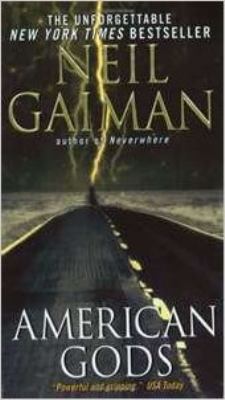 The storm was coming….Shadow spent three years in prison, keeping his head down, doing his time. All he wanted was to get back to the loving arms of his wife and to stay out of trouble for the rest of his life. But days before his scheduled release, he learns that his wife has been killed in an accident, and his world becomes a colder place. On the plane ride home to the funeral, Shadow meets a grizzled man who calls himself Mr. Wednesday.  A self-styled grifter and rogue, Wednesday offers Shadow a job. And Shadow, a man with nothing to lose, accepts.

All around them a storm of epic proportions threatens to break. Soon Shadow and Wednesday will be swept up into a conflict as old as humanity itself. For beneath the placid surface of everyday life a war is being fought — and the prize is the very soul of America.As unsettling as it is exhilarating, American Gods is a dark and kaleidoscopic journey deep into myth and across an America at once eerily familiar and utterly alien. Magnificently told, this work of literary magic will haunt the reader far beyond the final page.