Sometimes animated shows give you all the feels. “BoJack Horseman” did this for me, and after recently finishing the last season, I came away satisfied and a little bit sad (in a good way).

At first glance, it might seem silly. The show features a world where humans and anthropomorphic animals exist together, the eponymous character being a horse. He’s living on the money he earned starring in a 90s TV show called “Horsin’ Around.” Often drunk, he now sits in his fancy LA house re-watching DVDs of the show, until a writer named Diane comes along to pen his biography.

Every character is flawed, relatable and real. The show delves into heavy topics like drug abuse, depression, betrayal and finding your identity. BoJack has gone through life hurting the people around him and yet he has close friends who care deeply.

Even BoJack’s friend/rival, Mr. Peanutbutter, despite his constant optimism and joy, has his share of struggles. After multiple divorces, he’s now married to Diane and their relationship is often strained. He has difficulty grasping her needs and doesn’t really understand her.

Despite these serious topics, the show also delivers many laughs and sharp-witted observations. Human and animal versions of real-world celebrities often appear, frequently voiced by themselves. Puns on signs in the background, along with many other visual jokes, had me pausing and rewinding to catch them all. This show rewards you for paying attention.

One of my favorite things about “BoJack“ is how the characters grow and change over time. They often have to learn the same lessons more than once, but they have a desire to try. They discover things about themselves, break and mend relationships, and keep moving.

I could say so much more about this show, but I’ll leave it to you to enjoy. You can borrow the first two seasons on DVD now. 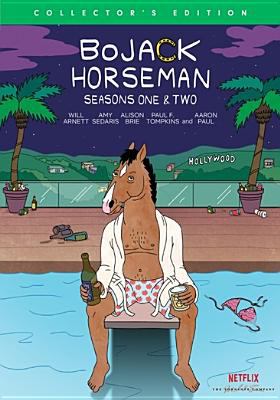 BoJack Horseman is a television star who peaked early and is trying to figure out what to do with his life now. Partying with Mr. Peanutbutter, saddled with a lazy roommate, and always trying to keep his on-and-off girlfriend happy, the rich but unfulfilled Horseman drifts through each day facing the challenges of modern life.