Burning Valley is perhaps the most political novel of Southwestern Pennsylvania ever written.  Published in 1953, the book is set in the depths of a hollow on the outskirts of Duquesne, Pennsylvania, in the years after World War I.

Phillip Bonosky, born in Duquesne in 1916, structures this story around the various ties that bind:  a cat’s cradle strung between actors.  At issue is the character of Benedict Bulmanis, a son of Lithuanian immigrants.  He desperately attempts to flee from the poverty and consequent degradation and disintegration of his community by withdrawing into the Church.  Benedict grows increasingly despondent as the institution fails to provide him with the convenience of clearly drawn lines between good and evil.  The adolescent obsessed with being worthy of the otherworldly salvation offered by the Catholicism of his heritage is unable to apply traditionally absolute moral tenets in a reliably predictable way and falls unceasingly short of recognized ideals.  Benedict’s ability to maintain the boundaries between worlds – moral and immoral – gradually weakens as the community in which he lives betrays the universality of the laws it professes.  The letters that arrive in the houses of the hollow announce a threat by the bank (and the accompanying force of the police) – serving a company in its efforts to expand – to evict the diverse residents from their uniform homes.  With justifications ripped from headlines past and present, the company advertises itself as the lifeblood of the community by providing employment, yet simultaneously adopts policies that destroy the land, the people, and their aspirations.

Bonosky is most successful in underscoring the ambiguity of self-proclamations of institutions that insinuate their way into our lives surreptitiously.  In conclusion, Bonosky illustrates a worldly salvation offered by a union leader; for the local reader, however, the story more immediately recalls an aspect of regional history guiltily fed down the memory hole of our collective consciousness as rapidly as the hollow of Benedict’s birth is filled by the slag of the steel company.  Ultimately, the question of identity remains the same:  between the groups we are born into and the groups we choose, an individual reconciles the realities and falsehoods of social, economic, and moral fluidity; in our attempts at redemption, to Whom do we belong? 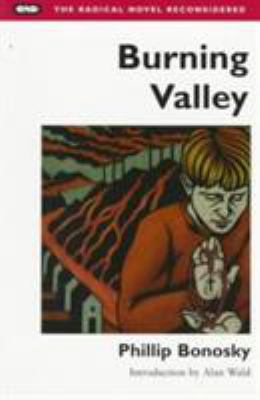 Originally published in 1953, Burning Valley tells the story of Benedict Bulmanis, son of a Lithuanian immigrant steel worker in western Pennsylvania. Determined to become a priest, Benedict faces inner conflict as he witnesses the steelworkers’ struggle against the destruction of their homes and the separation of classes that even his church cannot escape.