The epigraph of Chuck Klosterman’s But What If We’re Wrong? is a quote by Arthur C. Clarke, speaking in 1964 about what the world might be like in the year 2000. It reads “If what I say seems to you to be very reasonable, then I’ll have failed completely.”

This is the core idea behind But What If We’re Wrong? In it Klosterman argues that our culture, like so many cultures before it, operates under the assumption that our most fundamental truths will always be accepted as just that—the truth. But history has shown that the Earth is not the center of the universe and an apple does not fall to the ground because it craves its natural place. New ideas surface, paradigms shift, and universally accepted truths turn out to be, well, wrong.

Over the course of But What If We’re Wrong?, Klosterman examines topics from quantum physics to democracy to television. Which scientific and philosophical concepts, which books, which musicians, which sitcoms, which sports will stand the test of time? And which will not?

Klosterman does not, like Arthur C. Clarke, look fifty years into the future, but five hundred. He asks which cultural icons will become anthropological relics. He asks whether the concept of gravity will survive. He asks whether the greatest writer of our time could presently be either completely unknown or completely disrespected. And his projections will almost certainly surprise you. 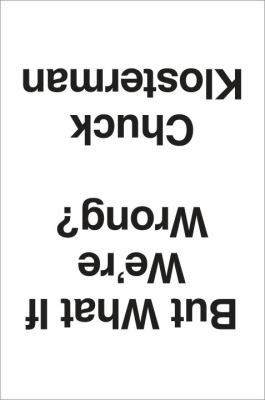 But What If We're Wrong?

Contemporary society, like so many societies before it, lives in a state of “casual certitude.” Concepts like democracy, gravity, or time, cultural institutions like sports, rock music, or television could never possibly be forgotten. But then again, what if we’re wrong?