One of my new favorite authors is Ryan Holiday. And by new I guess I mean in the last year.  I’ve been burning through his books and his interviews on various podcasts and blogs. He introduced me to the modern view on Stoic philosophy and then to the ancients. All in all I owe a lot of my recent trains of thought to this man. But I don’t want to get preachy on this post, that’s for a personal blog or actual conversations. This post is focused on his latest book Conspiracy.

I’m sure you have heard of the Hulk Hogan sex tape. There was a period of time that you couldn’t get away from it, unfortunately. Gawker, the purveyors of said tape, took a stand on the Freedom of the Press and posted a video they didn’t have the rights to and knew it. So Hulk Hogan sued them. They were so used to being bulletproof, to being the biggest baddest people on the block that they didn’t care. They barely showed up for parts of the trial and for parts of it did some really dumb things. Like they kind of thing people start shunning you over.

In the end Hulk Hogan won. The judge awarded him damages to the point where Gawker broke and was sold to the highest bidder. Soon after it came out that Peter Thiel had been the silent backer in the case and had used it as revenge/comeuppance on Gawker for outing him as gay in its early days. That is conspiracy. That is what this book focuses on.

Ryan Holiday interviewed all the major player including Peter Thiel and Nick Denton, head of Gawker, and comes away with a book from all perspectives. He is not kind to anyone and tries to show them in the most authentic light possible. It is a great book that I highly recommend and the audio version is read by Ryan, lending it more inflection that I think is powerful. 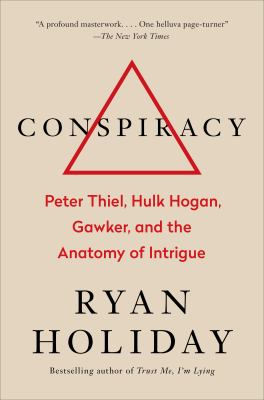 Describes how billionaire investor and PayPal founder Peter Thiel took down Gawker Media after they outed him by putting them through a proxy war through the Florida legal system after the media outlet published an illegally recorded sex tape involving Hulk Hogan. (Novelist Description)