Benefiting from the release and declassification of many key documents relating to Einstein’s life and work, Isaacson paints a rich portrait of the man whose name has become synonymous with genius. Personal letters hitherto unviewed allow Isaacson to develop the personal side of Einstein’s life, something earlier biographers could only guess at, resulting in a deeply intimate biography.

Einstein’s influence was and is not felt in scientific communities alone. He was a music lover who played a mean fiddle; he influenced philosophy, politics, and education systems. Einstein was nationally unbound – a dove in flight over the vast cosmic ocean, making indelible impacts wherever he landed on the shore.

Beyond Einstein’s pacifism, global humanitarianism and scientific insight, what kept me glued to this vast biography were the faults he displayed. Let me be clear: this is not a case of schadenfreude; my heart ached for Einstein when he struggled with personal and familial relationships. In these struggles one begins to feel kinship with Einstein. To see himself through difficult times, Einstein would dive into gedankenexperiment (thought experiments) based on his deep intuition of nature. Unlike your and my own heady speculation, his mental gymnastics changed how physicists, and all of humanity see the world.

If you’re interested in the era of history Einstein inhabited, and would like to know more about some of the other personalities behind scientific discoveries, check out the creative non-fiction book The Age of Entanglement: When Quantum Physics Was Reborn by Louisa Gilder.

If you want to familiarize yourself with the basic arguments of the quantum debate while getting to know many of the personalities behind early-20th century physicists, you’ll love Quantum: Einstein, Bohr and the Great Debate About the Nature of Reality by Manjit Kumar. 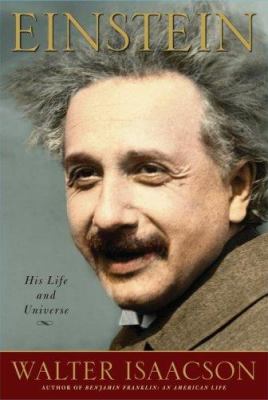 Einstein: His Life and Universe

By the author of the acclaimed bestsellers Benjamin Franklin and Steve Jobs, this is the definitive biography of Albert Einstein. Isaacson’s biography shows how his scientific imagination sprang from the rebellious nature of his personality. His fascinating story is a testament to the connection between creativity and freedom.