My name is Angela. Not Emily, Alex or Sarah. So, when a book literally speaks to me (AKA has a character named after me), I get pretty excited.
Decelerate Blue, a gorgeously illustrated graphic novel by Adam Rapp and Michael Cavallero, is just such a book. The back of the book has a letter typed out. It begins “Dear Angela…” an implores Angela to read the book.

Needless to say, I took this book to a family weekend gathering and read it instead of interacting with my family. Once I explained that the book told me to do it, they gave me my space.

Angela lives in an accelerated world. It’s familiar enough to a reader living in tech driven westernized society, a la some episodes of Black Mirror. The feeling of the plot is the Matrix meets 1984 meets Fahrenheit 451 meets Animal Farm. There are probably wisps of many other dark future stories wrapped up in there as well. What makes it special are the unique quirks of the society portrayed, and the movement of the illustrations in each panel. The concept of slowing down as a rebellious act is particularly resonant for a reader who lives in a 24/7 workaholic world.

Needless to say, Angela (the character in the book) is awesome. She finds the folks building an alternate society underground. She is changed by reading an amazing book. She is open to new connections and is a helper. But, will a brief mission back above ground blow their cover? Will Angela be able to stay true to herself as she finds love, faces her family and confronts a world she can’t connect with but also can’t entirely leave behind? 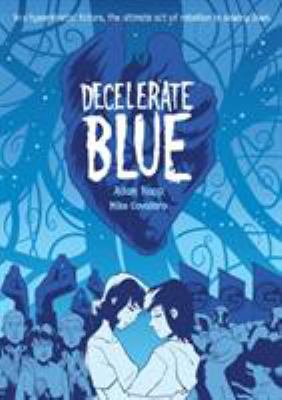 Angela finds herself recruited into a resistance movement where the key to rebellion is taking things slow. In their secret underground hideout, they create a life unplugged from the rapid-fire culture outside. Can they free the rest of the world before the powers that be shut down their utopian experiment?