What does it take for someone to fake her own death, and why might she be inspired to do it? Does “playing dead” guarantee freedom from financial troubles, criminal proceedings, or annoying spouses? What’s the difference between death fraud and merely disappearing without a trace?

Elizabeth Greenwood, motivated by a six-figure student loan tab, thinks of walking away from her debt and living out her days in a tropical island country, teaching English to make a bit of cash. Her casual daydream becomes a fascinating odyssey in Playing Dead: a Journey Through the World of Death Fraud, where she hangs out with the peddlers of fake death products, the customers who are desperate to be “dead,” and those who attempt to expose them. Greenwood talks to intrepid investigators who travel the world seeking clues about suspicious deaths so that insurance companies don’t make needless payouts. She meets those who’ve “drowned” to escape jail time or debt, the family and co-conspirators they’ve left behind, and those who can provide a fake death certificate and even a corpse double from corrupt bureaucrats in the Philippines.

Told in an easy, conversational style, this one’s a treat for Jon Ronson fans or anyone who’s ever fantasized about escaping it all and reinventing oneself. 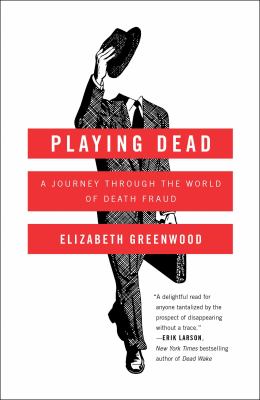 Playing Dead: a Journey Through the World of Death Fraud

Hoping to escape her mounting college loan debt, a young woman contemplates faking her death and ends up writing a fascinating book about how and why (or why not) to do it.