Pat Williams grew up in Atlanta and was raised from a young age to take money by illegal means. Her mother would wake her in the middle of the night, calling her by the pet name, “Rabbit”, and send her just downstairs in the family home, to the illicit moonshine bar operated by Pat’s grandfather. If Pat was a quick enough pickpocket, several drunk and sleeping customers would be leaving with lighter wallets in the morning.

A bad situation became worse for Pat and her siblings after their grandfather was arrested and the family home was no more. Their mother, already an abusive alcoholic, alienated everyone who had shown her kindness or compassion and finally gave in to unimaginable rage; she would shoot her gun at her children to get their attention and obedience.

Pat’s adult role models until now had been less than reputable and it would be hard to blame her for what she did next. Hungry, poor and very nearly homeless, Pat fell in with a drug dealer. She eventually learned the trade, and practiced it well enough so that she was able to sustain the operation and make it her own after his arrest.

You’ll have to read what follows to believe how Pat not only escaped but rose far above the circumstances of her brutal upbringing and the choices it made for her. Her story of surviving and thriving will leave you laughing, crying and shaking your head but will also serve to inspire anyone who desires to achieve a better life. 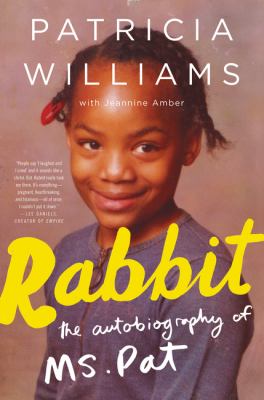 Rabbit: The Autobiography of Ms. Pat

Armed only with the tools of hustling and humor, 16-year-old, mother of two, Pat Williams set out to make her way in the world. Now, a popular comedian, Williams shares her sordid past and how she overcame it all.