There’s only one type of princess character I’m ever drawn to—the reluctant and/or rebellious one. Behind the Throne, the first in a new trilogy by K.B. Wagers, delivers the best reluctant princess adventure I’ve read in a long time. Hailimi Bristol is so reluctant, in fact, that she ran away from home and became an infamous gunrunner and smuggler under the alias Cressen Stone, going so far as to get permanent body modifications down to her genetic code to hide her true identity.

But all’s not well in the Indranan Empire, and so Hail’s sister (a much more respectable type of princess) sends a pair of Trackers after her. Unfortunately, by the time they find Hail, most of her family is dead, her mother’s health is failing, and it’s up to her to save her empire and its people from dangerous conspirators attempting to take over.

Hail’s gruff, unlady like manner of doing business ruffles some feathers, so of course instead of trying to act more like her strict empress mother, she rubs as much salt in the wound as she can. She can’t help it; she never wanted to rule, but she’s not one to run from a fight. And Indrana needs her fight more than it needs a stolid princess.

K.B. Wagers is that rare sci-fi writer who not only knows how to create amazing characters, build an interesting world, and spin a gripping story, but also writes with Literary (capital L) precision. Her excellent use of detail brought the world of Indrana alive for me.

If you’re looking for a story rife with nuance, heart and characters you’ll really want to have a cup of chai with (chai is Hail’s beverage of choice), check out Behind the Throne. 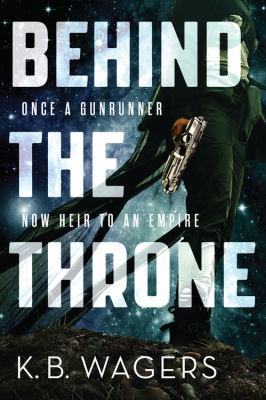 Hail Bristol never wanted to rule the Indranan Empire, so she ran away to become a gunrunner. But now her sisters are dead and her mother is dying, leaving her to the throne she never wanted.