Where do you place the blame when your job is taken away? Pittsburgh Opera continues its 2019-2020 season with the Pittsburgh premiere of The Last American Hammer. The opera, by the creative team of Peter Hilliard and Matt Boresi, tells the story of Milcom Negley, a man who has lost his job in a hammer factory. Milcom is also a “Thirteenther,” a conspiracy theorist who believes an obscure would-be thirteenth amendment negates the authority of the American government. Milcom heads to the museum in his town, the only institution that still receives federal funds. Armed with the last hammer to roll off the factory’s assembly line, he seeks justice and decides to hold a proxy trial against the government with the museum’s prized Toby jugs as physical stand-ins for the court. Only Tink Enraught, the museum’s curator, and FBI Agent Reyes stand in his way.

The Last American Hammer was commissioned by UrbanArias and had its premiere in 2018. This link features an early draft of the libretto and video logs that were created to introduce the three main characters in this work. An interesting fact… the opera was workshopped at Carnegie Mellon University’s School of Music in February 2018 with the title, The Thirteenther.

The bluegrass-infused score brings the flavor of American roots music to the operatic stage.

To get a taste of the music before you go to the opera, visit Pittsburgh Opera’s website and click on Audio Preview Excerpts.

Explore this title in our collection to understand the inspiration behind this new work. Maybe I will see you at the opera! 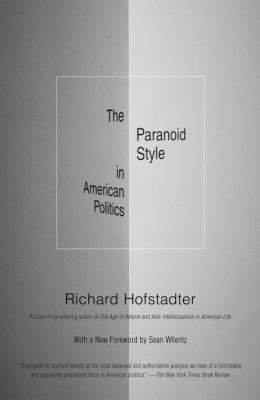 The Paranoid Style in American Politics, and Other Essays

The title essay of this collection first appeared in Harper’s Magazine in November 1964, not long after Senator Barry Goldwater won the Republican presidential nomination over Nelson A. Rockefeller. Hofstadter explores the influence of conspiracy theory and similar political movements throughout American history. Recommended by the creative team of The Last American Hammer.