In preparing to write this Staff Pick, I went back and looked over several of the last books I’ve read in the hopes of finding something easy to recommend.  No such luck.  Before discovering the books I’m about to mention, I went through a string of unhappy reader relationships.  Series that were too inconsistent by the second book for me to finish them.  Stand-alone novels that were written unevenly: chapters of fluff interspersed with dark and unsettling tales.  No thanks.

Oh where, I wondered, was a modern novel I could get lost in?  Thanks to a coworker, have I got some interesting (if difficult to explain) books for you!

Jasper Fforde is the British author’s name, and I’ve heard it for years.  It just took me this long to try his Thursday Next series.  The first book in the series is entitled The Eyre Affair, and the second is Lost in a Good Book.  I admit that right now I’m only partway through the second book, but I also confess that I’m in love with this series.  But I’d also adore being able to explain to you what it’s about which, in my opinion, is pretty much impossible.

“Whimsical,” is how my coworker describes it, and I’d have to agree.  But it’s more than that, too.  It’s so funny it makes me laugh out loud.  It contains clever inventions that make my brain whir.  It’s got mystery.  Adventure.  Magic.  Romance.  Time travel.  And enough references to classic English literature to make this bibliophile swoon.

Did I mention it also has dodos?  The dodos say, “Plock, plock,” and are addicted to marshmallows.  Anyway.  Yeh.  Just read it. 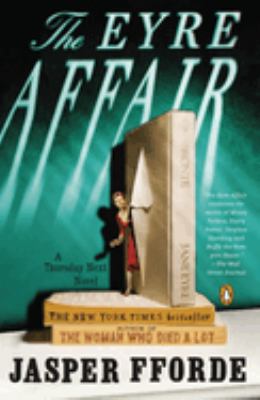 In an alternate version of 1980s Britain where literature is taken so seriously that thousands of men are named John Milton and there are gang fights between the Impressionists and the Surrealists, villain Acheron Hades steals an original manuscript of a book and finds a way inside… killing a minor character and altering every subsequent copy of that book forever.  He threatens to do the same to Jane Eyre unless his demands are met.  Can literary detective Thursday Next stop him before it’s too late? 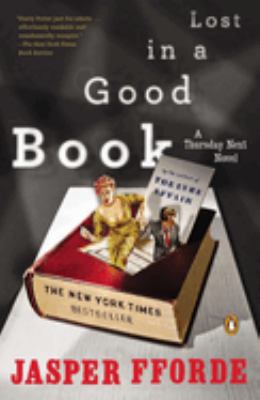 Lost in a Good Book

During the events of The Eyre Affair, Thursday stranded sinister Goliath agent Jack Schitt in a copy of Edgar Allen Poe’s The Raven, and now they want him back.  In order to ensure her cooperation, they use time travel to erase Landen from history.  Meanwhile, she must help her renegade ChronoGuard father stop another one of Mycroft’s inventions from ending the world.