I recently went fishing for the first time in nearly two decades.  In order to get to the desired fishing spot along a wide local creek in the area, three friends and I had to traverse a well worn path etched into the hillside.  While the path was wide enough for a single person to walk without brushing by much vegetation, one had to be careful as to where they took their next step.  Jagged rocks dotted the trail in erratic intervals, carving out dips and valleys into the footpath and should you not look down, you could find yourself with a twisted ankle, a broken bone, or as the victim of a nasty fall at the very least.  While I was lucky enough to escape unharmed, I did end up accidentally submerging my leg into a mud puddle that was ankle deep.  And I didn’t catch any fish. Although I had my suspicions before this, it was then that I had concluded that I am not an outdoors person.

While this trek was taking place, I couldn’t help but think about the book that I was reading at the time given the location that I was in.  That book is Vasily Peskov’s Lost in the Taiga.  Lost in the Taiga is written by a Russian scientist who came across a family of four deep in the Siberian “taiga”, which is a dense, swampy forest that makes up much of northern Russia.

The Lykov family are “Old Believers” – traditional Orthodox Christians who eschew many of the religious reforms that have taken place within the Russian Orthodox Church.  Old Believers faced persecution from the Russian government under the Stalin regime, and many Old Believers were forced from cities near the Siberian hinterlands either into larger cities or deeper into Siberia.  Faced with this dilemma, patriarch Karp Lykov decided to move his family deep into the wilderness to avoid government scrutiny.

What follows is a classic and brutal narrative of “Man Vs. Nature” 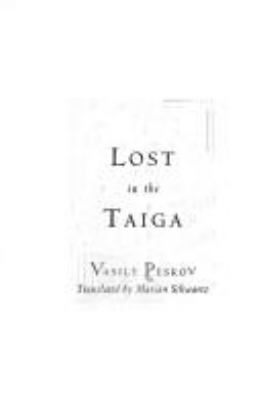 Lost in the Taiga: One Russian Family's Fifty-Year Struggle for Survival and Religious Freedom in the Siberian Wilderness

For Russians who followed journalist Peskov’s visits to the Lykov family from 1982 to 1991, and now for Americans, Lost in the Taiga illuminates both the past and “the road not taken.” Crowded in cities, we read about the family’s decades of isolation in the Siberian wilderness. Surrounded by home appliances, we visit a household where, initially at least, matches were “not allowed.” Alienated and skeptical, we marvel at the strength of the family’s religious faith. For the Lykovs are Old Believers whose fundamentalist Russian Orthodox ancestors left the Ukraine for Siberia’s tundra in response to the seventeenth century’s Great Schism; the family moved deeper into the Abakan River Valley in the 1930s and 1940s as sectarian differences and disturbing contacts with secular society convinced patriarch Karp Osipovich that salvation could only be found far from the world. Rediscovered by geologists in 1978 and brought to their countrymen’s attention by Peskov’s reportage, the remaining Lykovs–Karp, in his final years, and younger daughter Agafia, now 50–build their fragile relationship with the outside world with thoughtful dignity. Schwartz offers a graceful translation of Peskov’s remarkable story, which celebrates the Lykovs’ threatened taiga wilderness as well as the powerful individuality of the members of this long-isolated family.