“I know I wrote letters to people with no address on this earth, I know that you are dead. But I hear you. I hear all of you. We were here. Our lives matter.”

There is an inherent beauty attached to the lost art of letter-writing—the vulnerability of carefully choosing and assembling the right words to be written in a script that is uniquely your own, the sensation of a pen or pencil gliding evenly across the surface of the paper as you tangibly convey your innermost self, the way it seems more personal to form individual characters rather than repetitively pressing and releasing their respective keys. There is a reason why we save and cherish handwritten letters for years—sometimes decades—after they are sent. Letters are proof that, at some point in time, someone out there cared enough to take out sheets of paper for you, sit down for you and, in between the lines, let you know that you matter—that you were worth a moment of stillness in a fast paced world.

When Laurel’s English teacher handed out an assignment to write a letter to a dead person, perhaps that is what he initially wanted his students to discover in the midst of their hyperconnected lives that are full of fleeting IMs, restrictive tweets and instant gratification. For Laurel, the assignment became more than discovering a bygone form of communication, it became a way to connect with her sister, May—to cope with her sudden death while carrying the guilt of a dark secret.

Laurel chooses to write to people who, much like her sister, left the earth far too soon: Kurt Cobain, River Phoenix, Amelia Earhart, Judy Garland, Janis Joplin, Amy Winehouse, Jim Morrison, and Elizabeth Bishop. She uses these young icons to draw connections to May so that perhaps by understanding and making sense of their deaths, she will come to understand and accept the loss of her sister. Maybe then she will finally be able to forgive herself for what happened that fateful night, and within some realm of possibility, May will be able to see them and know that someone out there cared enough to take out sheets of paper for her, sit down for her, and she will finally know that she mattered. 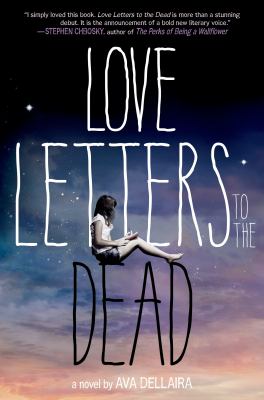 Love Letters to the Dead

Inspired by a class assignment to write a letter to a dead person, Laurel ends up composing letter after letter to famous people that died too young, just like her sister, May. She tells them about her struggles at school and at home, and about how hard she finds it to forgive the sister that left her behind. Through her one-sided correspondence, Laurel explores the truth of what happened and learns to see May in a new light.