After the opening ceremony of the Olympics, a customer asked if we could tell her the order in which the countries paraded. She had thought they were alphabetical, so she had stayed up late to catch the U.S. athletes. The order was indeed alphabetical…in Portuguese. She had tuned in a little late to catch the athletes from ‘Estados Unidos da America’ earlier in the evening. She also asked us for a world map, because she stated that, although being over 70 years old, she “had never heard of half of these countries” and wanted to know where they were. This pick was inspired by that interaction.

Toby Lester’s The Fourth Part of the World tells the engrossing story of the ‘Waldseemuller Map’ and how what it depicts came to be. Printed in 1507 by German cartographer Martin Waldseemuller, this is the earliest map with the word ‘America’ printed on it as a label for a part of the New World.  So, what was ‘America’ to Waldseemuller in 1507?  Well, as the book relates, it turns out that ‘America’ was applied to the large portion of South America still being colonized by the Portuguese at the time.

We call it Brazil.

This book is filled with all kinds of historical information about cartography, navigation, and exlporation. There’s something for everyone here. You meet not only Columbus, but Ptolemy and Marco Polo. You also meet Amerigo Vespucci, whose name eventually came to represent all of the New World – ‘The Americas’, but began by being the name for the place where both the Old and New Worlds are now engaged in a demonstration of competition, comaraderie, and goodwill, illustrating that we can be (and really are) One World.

How’s that for a geography lesson? 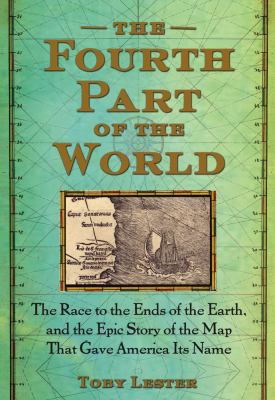 The Fourth Part of the World : the Race to the Ends of the Earth, and the Epic Story of the Map that gave America its Name

In 2001, the Library of Congress paid $10 million for the only known complete copy of the Waldseemuller Map, a 12 section map of the (then) known world printed in 1507 by German cartographer Martin Waldseemuller. The significance of the map lies in the fact that it is the first known map to have the word ‘America’ printed on it. However, in 1507 what was known and labeled ‘America’ was not what we consider the United States, nor did it even refer to anywhere in North America. In 1507 ‘America’ was the (so far) explored regions of South America, and more specifically, the coast and immediate hinterland of what is now Brazil. Toby Lester’s fascinating story detailing the people, events, facts, and philosophies which culminated in the creating of the map is a wonderful potpourri (cartographcial history, medieval cosmography, mathematics, exlporation, adventurous travelogue) with a cast that includes Ptolemy, Columbus, Marco Polo, and last but not least, Amerigo Vespucci.