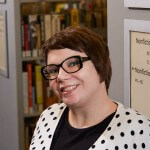 I want to be honest with you. I did not know how important John Lewis was to the Civil Right Movement before 2013, when March Book One was published. I knew of and studied other important figures in the fight for civil rights: Dr. Martin Luther King Jr., Thurgood Marshall, Malcom X and even Claudette Colvin. Yet, I was unaware that the current Congressman from Georgia had played such a key role in securing the rights we all have today. The March graphic novel series gave me a first person perspective on the civil rights movement while Powell’s powerful and stark artwork bring events over 50 years ago to life.

This National Book Award-winning graphic memoir takes readers through Lewis’s life, beginning with his childhood on a sharecropping farm Alabama. He drew inspiration from the Montgomery Bus Boycott and Dr. King’s work, and began to develop his own path as a civil rights activist. By the age of 23, he earned a spot as a keynote speaker at the March on Washington for his work as a student organizer. His story is framed by the day the United States inaugurated its first African American president, Barack Obama. This creates a context that serves to show how far we’ve come in the struggle for equality. Current events have created a divide within this nation while unveiling that we still have a long battle to face. I have been inspired and empowered by John Lewis’s courage to continue to stand up for what is right through non-violent protests and staying active in the political process as he continues to ask:

John Lewis is a living legend who continues to stand up for the rights of all people while still getting into “good trouble.”