While you may reflect upon how important and meaningful books and libraries are for you personally this week, the role they have played in people’s lives throughout history may not be something which immediately comes to mind. The Book Thieves will serve as a powerful reminder of that role.

While the story of the Nazi efforts to loot the art and cultural artifacts of Europe during World War II is well known, less attention has been paid to the same effort regarding books and libraries. While images of public book burning events are forever linked to the rise in power of the Nazi party, there was more method in the madness to the agencies tasked with pirating the libraries of people and organizations deemed unfit for the ‘new’ Germany. These collections were mined for the efforts to re-write history in the Nazi ideology, and rather than being burned they were cataloged and hoarded.

After the war, many public libraries in Germany scavenged these already looted collections, now left behind to rot, for their own shelves. The unsavory origins of hundreds of thousands of books on their shelves have recently come to light for staff members at these some of these libraries. Their efforts to repatriate them as much as possible using bookplates, inscriptions, and old catalogs becomes a story about the relationship between people and books, in all it’s manifestations. In one, the granddaughter of a concentration camp victim receives a book her grandfather owned as a child and says that it is the only physical object belonging to him the family has ever seen.

Here’s wishing that all the lost books are found, and that future granddaughters and grandfathers always have books to read and libraries to visit together. 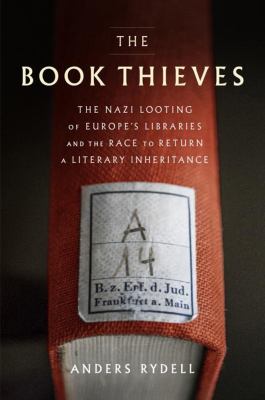 The Book Thieves : the Nazi looting of Europe's libraries and the race to return a literary inheritance

This book details a little known entry in the list of atrocities and destruction instigated by Nazi Germany during World War II. Years before the fighting started, the Nazi party, and it’s ideological predecessors in post-World War I Germany, had promulgated a systematic purge of books, newspapers, journals, and publications deemed unfit for the new Germany. This continued unabated during the war. Personal, institutional and organizational libraries were confiscated and looted for their contents – either to be destroyed, or to be re-purposed in the writing of the Nazi vision of history. After the war, many public libraries in Germany, seeking to rebuild collections lost to the vagaries of warfare, scavenged these already looted books left behind by the Nazi organizations tasked with collecting them. Only recently have staff at these libraries discovered the origins of hundreds of thousands of books on their shelves and have begun efforts to repatriate them as best they can.