With Ordinary Victories and its concluding volume, Ordinary Victories:  What is Precious, Manu Larcenet describes the common state of humanity in our contemporary moment.  Ordinary Victories is a primeval and profound story of a young man whose wounds of anxiety – both psychological and physical – are both caused by and exposed to a world in which descriptions of reality do not satisfy sense observations, and the twisted rhetoric of reason opposes empty allegiances and convenient justifications.  The title suggests a perception of life as an ongoing struggle of the subjective self toward a mutual sympathy forged in collective dependencies.

Marco, a young documentary photographer – struggling to bridge equivocal worlds between which lie the chasm of a profound insecurity witnessed in unpredictable panic attacks – and the son of a shipyard worker, presents the foil from which the conflicts arise, and those we meet through him expose the vulnerability of our own lives: with so many of our families separated by distance, Marco’s mother explains the root of rootlessness, as she unsentimentally divulges the necessity of workers to follow the money; with so many of our soldiers abroad, and many returning home damaged, Marco’s neighbor confesses the fathomless pain of political necessity, as he recounts participation in a futile war and its tortured aftermath; with so many of us thrown out of closing mills, factories, and corporations, the shipyard workers express frustration at economic realities, embodying the desperation of confronting seemingly anachronistic skills.  Predictably, his psychoanalyst, and less predictably, his aging parents, his brother, his girlfriend, his neighbor, and his cat (named, appropriately, “Adolf”), are behind and around him, both supporting and forcing him to find a way of navigating a moral ambiguity that he’d until now been indulging in photojournalism, isolation, and medication.

In art as sensitive as Marco himself, Larcenet depicts these battles and others, and in Marco offers a spark of hope.  Larcenet is not exploitative in peeling apart the folds of skin to expose wounds; he allows the curious and vulnerable reader to appreciate both pain and sublimation by unsettling the eye with aesthetic nuance, as Marco’s tectonic states of mind and shifting realities are revealed in distinct graphic styles.  The medium, a graphic novel, belies the notion that serious literature is strictly textual by capturing emotion in turns of attentive art.  The reader’s glance is enraptured by the eyes of the characters, each betraying the honest expressiveness of which the heart is capable in the most desolate silence, beyond words.  Larcenet illustrates the struggle in all of its various perspectives, and succeeds brilliantly:  arguably, nothing has yet been published in the 21st century that so purely and transparently records the fragility of our decisions and lives as insecure individuals.  This essential work of art successfully represents the tangling ambiguities of the sources of fear and love, attraction and repulsion, and unravels how these emotive responses cling to each other to create authenticity within the person.  A beautiful story about all the colors of life, Larcenet illuminates and celebrates all of our “ordinary victories”.

This is the first part of the story of Marco, a photographer a little late in learning to turn the lens on himself. 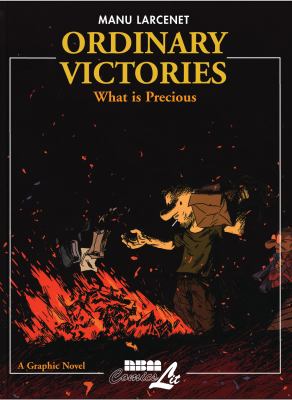 Ordinary victories : What is Precious

This concluding volume reveals the development not just of Marco’s photographic project, but of Marco himself.